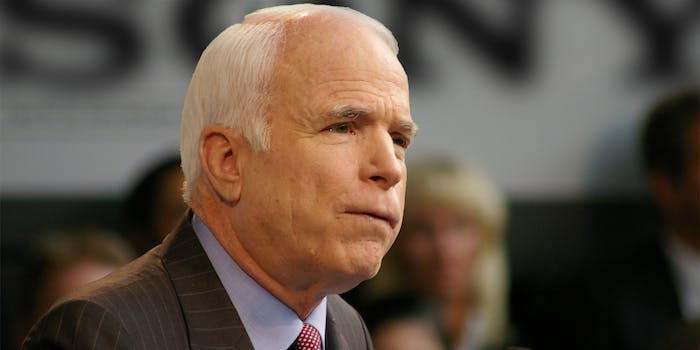 'I think it’s important for Donald Trump to express his appreciation for veterans—not John McCain.'

Sen. John McCain (R-Az.) is facing the most turbulent reelection campaign of his career thanks to Donald Trump, the presumptive Republican presidential nominee.

Trump’s bid for the White House has been punctuated by the candidate’s disparaging remarks about women, Hispanic people, Muslims, and even prisoners of war. This includes calling out McCain during the start of the Donald’s candidacy.

In a pre-taped interview with CNN’s Jake Tapper, McCain said that he had vowed to support the Republican nominee, if only to avert sending Hillary Clinton to the White House come November. Trump’s frequent bombastic remarks have yet to dissuade McCain from falling in line, it seems.

In the time of Trump, 79-year-old McCain represents an embattled, potentially waning arm of the Republican party coveting a traditional limited-government, anti-entitlement, pro-military brand of conservatism—whereas Trump has largely succeeded with the Republican base by painting himself as an anti-establishment candidate with little regard for traditional conservative values.

McCain is supporting Trump, but only by default. The Arizona senator has indicated that a Clinton presidency “would cause the economy to continue to stumble along and put us in the economic malaise that basically we’ve had for eight years.”

Trump had this to say about McCain, a former Navy pilot who was shot down over Hanoi in 1967 and imprisoned by the North Vietnamese for five-and-a-half years: “He’s not a war hero. He’s a war hero because he was captured? I like people who weren’t captured.”

“I think it’s important for Donald Trump to express his appreciation for veterans—not John McCain, but veterans who were incarcerated as prisoners of war,” McCain said on Sunday. “When he said, ‘I don’t like people who were captured,’ then there’s a body of American heroes that I’d like to see him retract that statement—not about me, but about the others.”

After McCain’s father was named commander of U.S. forces in the Vietnam war, he was offered early release by his North Vietnamese captors, an offer he refused unless all other prisoners captured before him were released as well. As a result, McCain suffered severe beatings and torture, and spent many of his final years as a prisoner in solitary confinement.

McCain continued: “I have never seen the personalization of a campaign like this, where people’s integrity and character are questions. That bothers me a lot. Because you can violently almost disagree with someone on an issue, but to attack their character and their integrity, then those wounds take a long time to heal.”

McCain’s de facto support for Trump aside, the senator said that “a lot of things would have to happen” before he would join Donald Trump on the campaign trail, including an apology to veterans of foreign wars.

In an interview last week, Trump denied needing the support of Republican leaders like McCain to take the White House, though he admitted being somewhat dependent on the party’s fund-raising capabilities, as he’s indicated that he will no longer be self-financing his campaign. Though Trump has agreed to meet with party leaders this week, including Speaker of the House Paul Ryan, he says he won’t be changing much about his campaign style.

“The establishment didn’t do anything to make me the nominee,” Trump said, “so its support won’t really make much difference in me winning in November.”