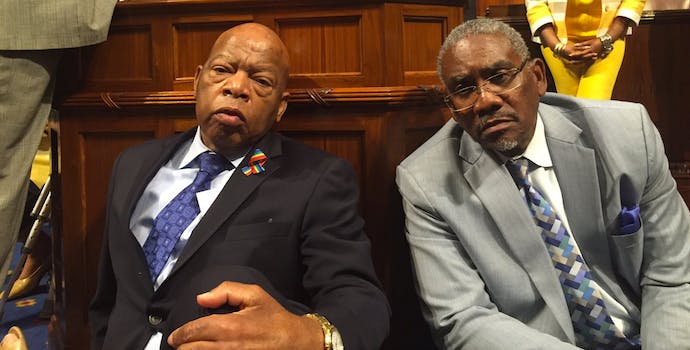 Lawmakers say they'll stay there 'as long as we need to.'

Democratic lawmakers launched a sit-in on the floor of the U.S. House of Representatives late Wednesday morning in an effort to force Congress to take action on gun violence.

Led by Rep. John Lewis (D-Ga.), who suffered police brutality during the Civil Rights era, the effort to “occupy” the House comes a week and a half after a terrorist killed 49 people and injured 53 others at a gay bar in Orlando, Florida—the deadliest mass shooting in recent U.S. history.

Lewis was joined by dozens of his colleagues in calling for Congress to enact gun-control measures.

“We have turned deaf ears to the blood of the innocent and the deaths in our nation,” Lewis said in a speech. “Mr. Speaker, where is the heart of this body. Where is our soul? How many more mothers, how many more fathers have to share tears of grief before we decide to do anything?”

Soon after Lewis’s speech, the live video feed from the House went black. According to Rep. John Yarmuth (D-Ky.), Sergeant at Arms Paul Irving called for a stop to videos and photos on the House floor. The camera feed is controlled by House Republicans. It remained off at the time of publication.

The Sgt at Arms is asking us to stop taking photos and video from House floor. Republicans should turn the cameras back on. #NoBillNoBreak

With the video feed cut off, photos began circulating on Twitter, where members of the sit-in are promoting their protest under the hashtags #NoBillNoBreak, #HoldTheFloor, and #GoodTrouble.

.@HouseGOP shut the cameras off.

Joining w/ @repjohnlewis &dozens of my colleagues for House sit-in for a vote to prevent gun violence #NoBillNoBreak pic.twitter.com/Lg4cM9Gzj0

Shame on you @HouseGOP for thinking a moment of silence is enough. We've had enough of the inaction, so we protest! pic.twitter.com/GFBXgz8nSr

After the worst mass shooting in US history, Congress still refuses to act. We'll be here until that changes. pic.twitter.com/kKcTbKFSuY

#WeWillNotYield the floor until we get a vote on common sense gun legislation Americans are demanding #NoBillNoBreak pic.twitter.com/wkmlnKrTz6

In a letter to House Speaker Paul Ryan (R-Wis.), Lewis called for a bipartisan effort to enact new gun-control measures.

“As the worst mass shooting in our nation’s history has underscored, our country cannot afford to stand by while this Congress continues to be paralyzed by politics,” Lewis wrote. “We urge you to lead the House into action and work with both sides of the aisle to pass commonsense solutions to keep American children and families safe.”

On Monday, the Senate rejected four bills that proposed new gun-control measures, including strengthening background checks for firearm buyers and preventing Americans who appear on terrorist watchlists from buying guns. Another bipartisan measure is expected to go up for a vote later this week.

In an interview with CNN, Rep. Joyce Beatty (D-Ohio) said the lawmakers would continue the sit-in “as long as we need to—all day, all night.”