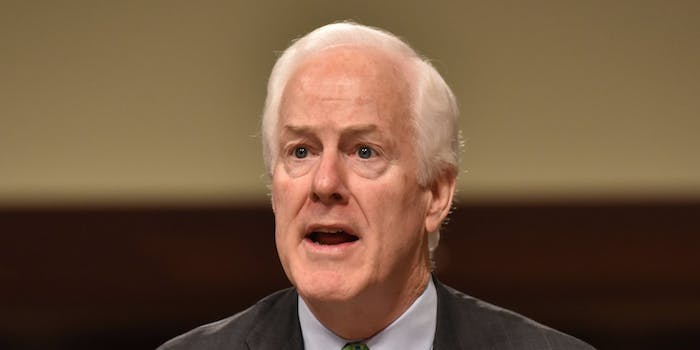 A Texas senator says it's doxing. It's not.

Sen. John Cornyn (R-Texas) has a bee in his bonnet over the Lincoln Project’s plan to maintain a list of people who worked for President Donald Trump‘s administration.

On Wednesday, Cornyn complained on Twitter that the anti-Trump political action committee was planning on “doxing” Trump staffers. His tweet included a link to a Wall Street Journal editorial board article detailing the Lincoln Project’s intent to make a list of Trump staffers and keep it updated with where they currently work.

The newspaper’s editorial board is also not pleased with the plan, titling its op-ed, “The Lincoln Blacklist.”

“The only reason for an anti-Trump group to publicize the employment information of former officials is to deter employers from hiring them,” the Journal complained.

As Stuart Stevens, a senior adviser to the PAC tweeted Saturday, the list will not include personal information, merely professional, so “they will be held accountable & not allowed to pretend they were not involved.”

“Doxing is illegal,” Cornyn tweeted of the plan. “These guys better check with their lawyers unless they want to spend their windfall gains on criminal defense lawyers.”

Doxing involves broadcasting private or identifying information, such as personal addresses, private phone numbers, and real identities. It’s only illegal if the information was obtained illegally, like by hacking. Doing an internet search for “Trump administration staffers,” and writing down their names, role in the administration, and where they later work is clearly legal.

Cornyn, an attorney, should be well aware of this.

“A terrorist organization known only as ‘LinkedIn’ keeps contacting me, urging me to log in to their criminal network and view detailed information about where people work. please sir you have to stop them,” mocked Molly Conger.

“John is brave to take on Big Phonebook,” commented another user.

Trump leaves office on Jan. 20, unless he is impeached and convicted or his cabinet invokes the 25th Amendment before then.