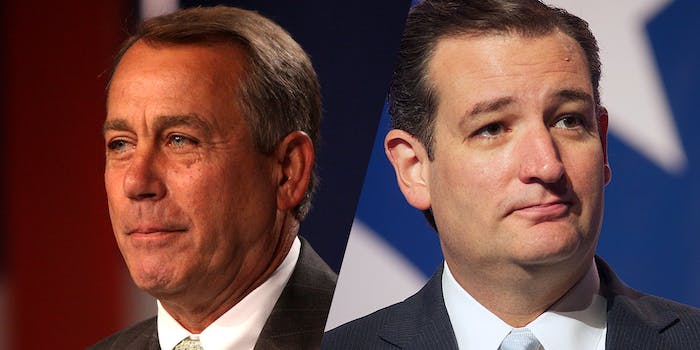 John Boehner thinks Ted Cruz is ‘Lucifer in the flesh’

What's the opposite of endorsement?

During a talk at Stanford University on Wednesday evening, Boehner gave his frank opinion of Texas senator and Republican presidential hopeful Ted Cruz.

“Lucifer in the flesh,” the former speaker said of Cruz. “I have Democrat friends and Republican friends. I get along with almost everyone, but I have never worked with a more miserable son of a bitch in my life.”

Boehner, who resigned from Congress late last year, is not the only prominent person to hold a negative view of Cruz.

From Cruz’s former roommate to former President George W. Bush, dozens of famous politicians have come out over the years to disparage the conservative senator. On Capitol Hill, Cruz has been criticized for using his colleagues and his position to elevate his own stature. And some people, like conservative commentator Ann Coulter, just think he’s dishonest.

“I have never worked with a more miserable son of a bitch in my life.”

This is also not the first time Boehner has criticized Cruz, whom he has said made his job as speaker more difficult. In September, for example, he called Cruz a “jackass” and a “false prophet.”

To be fair, Boehner also called himself a “jackass” during the Stanford event, saying, “I think my proudest accomplishment is walking out of there the same jackass I was 25 years before.”

Boehner does not hold the same negative view of the other GOP presidential candidates, whom he calls his friends. Donald Trump, the Republican front-runner, is Boehner’s “texting buddy,” he said.

The same could not be said of Hillary Clinton, the former secretary of state and current Democratic presidential frontrunner. “Oh I’m a woman, vote for me,” Boehner said, mocking Clinton.

Boehner’s comments come amid Cruz’s struggle to close the delegate gap between himself and Trump, who won all five state contests on Tuesday by wide margins, further solidifying his place at the front of the GOP pack.

Cruz attempted to steal the spotlight back from Trump on Wednesday by announcing the selection of Carly Fiorina, his former rival for the nomination and the former CEO of Hewlett-Packard, as his running mate.