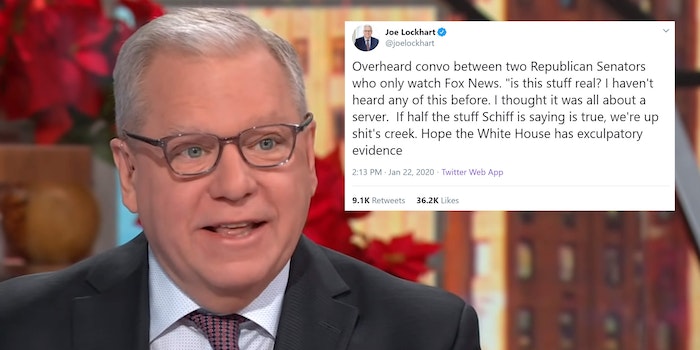 Joe Lockhart's Twitter joke didn't go over all that well.

One of the only agreed-upon facts by both parties in the run-up to the Senate trial over President Donald Trump’s impeachment was that senators in both parties had already made up their minds.

No amount of evidence from Democrat impeachment managers was going to persuade lawmakers on the right, and no passionate defense of the president from his lawmakers would convince anyone on the left to vote to acquit—well, except maybe Sen. Joe Manchin (D-W.V.).

Which is why this tweet from CNN political analyst Joe Lockhart raised some immediate eyebrows.

“Overheard convo between two Republican Senators who only watch Fox News. ‘is this stuff real? I haven’t heard any of this before. I thought it was all about a server. If half the stuff Schiff is saying is true, we’re up shit’s creek. Hope the White House has exculpatory evidence,'” Lockhart wrote.

Overheard convo between two Republican Senators who only watch Fox News. "is this stuff real? I haven't heard any of this before. I thought it was all about a server. If half the stuff Schiff is saying is true, we're up shit's creek. Hope the White House has exculpatory evidence

With 36,000 faves, it is fair to say it went viral, and it’s easy to understand why. It’s a shocking claim. Republicans suddenly breaking from the president over his impeachment?

It was, though, just a joke about the news bubble Republicans have been living in, where conspiracy theories reign.

Ok maybe I made up the convo, but you know that's exactly what they're thinking.

“Ok maybe I made up the convo, but you know that’s exactly what they’re thinking,” Lockhart wrote about ten minutes later.

Lockhart is a guest analyst on CNN, not an employee (or for that matter a reporter), so he’s not held to the kind of standards others at the company might be with their social media accounts.

But that didn’t stop non-stop narcing going on from conservatives and right-wingers demanding a tweet retraction.

The former White House press secretary later admitted to making this whole conversation below up, but keeps up the tweet without deleting anyway (because accountability is basically dead). https://t.co/KFEglmq4pS

CNN contributor making things up again. Later admitting he made it up as a "joke." More like Adam Schiff fan fiction. (This was retweeted by Washington Post's Jennifer Rubin, the fake conservative there). https://t.co/2VwIMajRl2

It’s not a thread when you wait for the original tweet to go viral and then post the second part. It’s blatant and grotesque trafficking in blatant lies. You should be fired sir. https://t.co/E3uaa9yn1r

Hey, @CNN—will there be any consequences for your Political Analyst sharing fake news on Twitter?

Or will he continue to be allowed on air just like the rest of the Never-Trump liars you give a platform to?

While people are rightfully mad for social media spreading fake news, the fact that conservatives are so upset about this one tweet is revealing. To begin with, a Senate trial is supposed to consist of impartial jurors, who are open to being persuaded by the other side. That they’d jump in outrage over this reveals just how calcified everything is.

But when the entire conservative defense of the president is based on perpetuating disinformation that’s been debunked by just about every single intelligence agency in the nation, maybe protesting about a tweet being misleading is just a tad overboard.