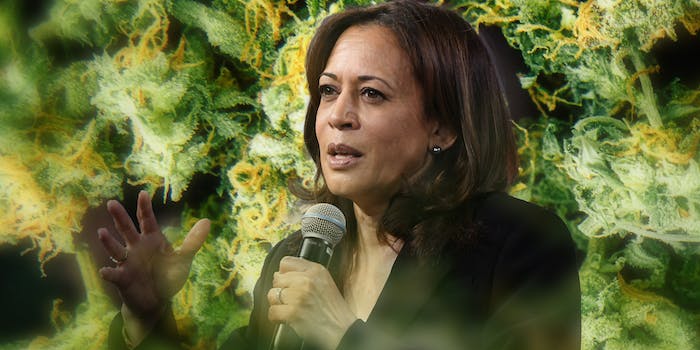 Joe Biden is ignoring a staff member who has a past history of pot use.

According to a new report from the Daily Beast, President Joe Biden’s administration is singling out and sidelining young staffers who have admitted to using marijuana.

Biden was one of the only candidates in the 2020 Democratic primary who didn’t support the legalization of marijuana, saying it should still be treated as a misdemeanor.

Now, according to the Daily Beast’s reporting, “dozens” of staffers “have been suspended, asked to resign, or placed in a remote work program due to past marijuana use.”

But to people seeing the news online, Biden appeared to be ignoring one glaring staffer who had publicly admitted to past marijuana use: Vice President Kamala Harris.

Harris has publicly touted her past marijuana use—before becoming more hardline on the substance when she was San Francisco’s district attorney. But there’s no denying she smoked ’em, even if her recollection of it is a bit off.

Given that Harris’ engenders outsized anger from both the far-left and far-right of the political spectrum, those two parties were united in (jokingly) saying Biden should remove Harris from her role as vice president.

Of course, it’s also possible that Biden was extending an olive branch to those staffers, given Harris’ penchant for arresting marijuana users.

According to the Mercury News, Harris oversaw nearly 2,000 convictions for pot use in her time as San Francisco district attorney.

Maybe Biden was actually being the benevolent one here?