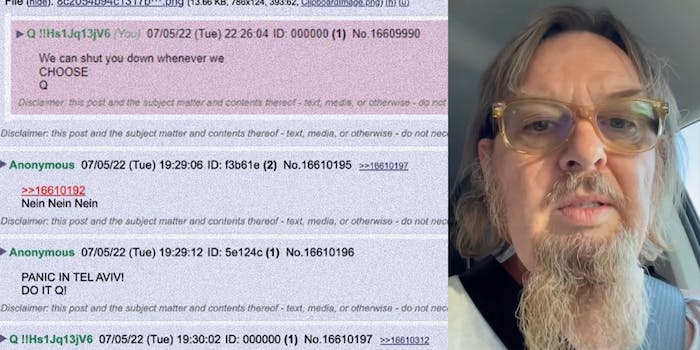 An imposter copied the tripcode into the name field.

QAnon world has been hit by another round of drama. Last night, someone seems to have duped Jim Watkins, the owner of 8kun, into believing they’d hacked Q’s account. They apparently convinced him that they’d taken it over by simply copying the tripcode that appears next to each so-called Q drop and putting it into the name field.

This is about the same level of sophistication as changing your display name on Twitter to “@realQAnon.”

QAnon is the conspiracy theory that elite cannibalistic pedophiles who worship Satan secretly control the world. The theory holds that a high-level government insider using the moniker “Q” posts clues like breadcrumbs on 8kun. Q posted on 8chan then its successor 8kun from 2017 to 2020.

Many believe that Jim Watkins and his son Ron gained or seized control of the Q account at some point and that the latter masqueraded as Q. Ron Watkins, who’s now running a flailing campaign for Congress in Arizona, stepped down as administrator of 8kun after the 2020 election. Soon thereafter, Q fell silent.

That silence continued until June 24.

That day Q (or someone posing as them with access to their unique tripcode) reemerged. Q’s supposed return failed to generate much interest beyond the initial surge of coverage, in part because QAnon followers can’t agree whether it actually is Q.

After a week of silence, last night, someone again posted as “Q” on 8kun. “We can shut you down whenever we choose,” they wrote, signing the message “Q.” The post included Q’s tripcode.

Some initially believed that someone had hijacked Q, a belief furthered when whoever it was responded to a couple of comments by writing, “Confirmed. Do not fuck with us. Q.” This message also included Q’s tripcode.

Watkins posted a screenshot of this interaction on Telegram. “I am working on it,” he wrote. “We are having some attacking going on.”

The narrative that someone had taken over the Q account soon crumbled, however, when people realized the so-called hijacker had simply copied Q’s tripcode.

“They’re just putting the tripcode right there with the username,” the Q Origins Project tweeted. “It’s not a Q takeover, it’s just a copy-paste.”

Many clowned on Watkins for falling for such a rudimentary impersonation attempt on his own website.

8chan cofounder turned Watkins/8kun critic, Fredrick Brennan, tweeted, “God this is hilarious. Jim Watkins freaked out. Shut off his own server. Because he saw an obviously fake Q drop.”

“Then he puts 8kun in read only mode. And finally, he fucks up the SSL and now it’s unreadable,” Brennan added.

Jim Watkins eventually also realized that no one had actually hijacked Q. “It is fake, it is not blinking. I am just stressing out, so I copied it,” he wrote.

“It wasn’t Q so it won’t go there, it is just someone putting the trip name in the name field,” he added, referring to aggregator sites that collect Q drops.

Some concluded that Watkins’ reaction to the fake Q post provides further proof that he’s either behind the account or working with whoever is.

“Epic trolling aside, today’s reaction from Jim Watkins (freak the fuck out) to a minor prank adds more circumstantial evidence to him posting or enabling the ‘new Q’ drops. It was business as usual when Q posts again, but unexpected Q?! Oh fuck oh shit,” @BlueAnonBurner tweeted.