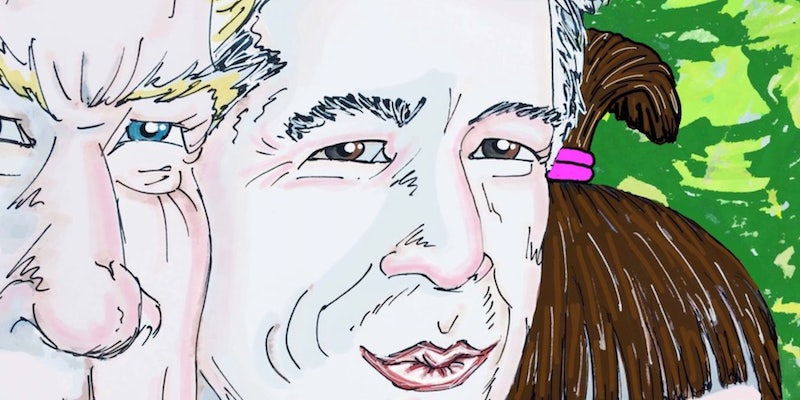 Jim Carrey has once again taken brush to canvas to express his loathing for President Donald Trump.

In recent years, the actor who butt-talked his way into our collective unconscious used drawings to go after the president and his current and former cohorts: including Rudy Giuliani, Michael Cohen, Sean Hannity, Scott Pruitt, and others.

"I've known Jeff (Epstein) for 15 years. Terrific guy. He's a lot of fun to be with. It is even said that he likes beautiful women as much as I do, and many of them are on the younger side." – Donald J. Trump pic.twitter.com/ib4l6rXlKA

For years, it was widely speculated that Epstein, a billionaire financier, operated a pedophile ring providing his rich and powerful friends with young girls for sex.

Reporting by the Miami Herald recently revealed that Epstein was accused of soliciting sex with underage girls, but managed to negotiate a stunningly lenient punishment and non-prosecution agreement with Trump’s labor secretary Alexander Acosta, then a prosecutor in Florida. The reporting included stunningly horrific details from dozens of Epstein’s alleged victims, many in their early teens when they were abused.

Trump’s relationship with Epstein was somewhat publicized during the presidential campaign. A woman came forward claiming Trump assaulted her when she was 13 in 1994 at Epstein’s house, but the news was largely lost in a sea of “grab them by the pussy” headlines.

The story has recently been revived by Epstein’s arrest on charges of sex trafficking on Saturday, which followed a judge’s order unsealing records from a case against him in a suit originally filed by right-wing blogger Mike Cernovich. Epstein pleaded not guilty.

Carrey’s latest drawing depicts Trump, Epstein and a young girl with a single tear on her cheek. In the tweet accompanying the painting, the actor/artist included this quote Trump gave New York magazine about Epstein in 2002: “I’ve known Jeff [Epstein] for 15 years. Terrific guy. He’s a lot of fun to be with. It is even said that he likes beautiful women as much as I do, and many of them are on the younger side.”

Carrey’s painting launched a cavalcade of commentary, including both criticism and praise of his artwork.

Also unspooling in the thread were references to the bizarre conspiracy theory that Trump ran for president as part of a grand plan to take down pedophile rings, and, of course, mentions of Bill Clinton flying on Epstein’s jet and hanging out on his island.

Yesterday, Clinton’s spokesperson said that he “knows nothing” of the charges against Epstein.

Now do one with Epstein and Bill Clinton, who rode on his plane, the ‘Lolita Express,’ more than a dozen times.

If Clinton was found to have abused girls w/Epstein, his base would reject him.

If Trump was found to have abused girls w/Epstein, his base would reject the findings.

Plenty of people refused to lose sight of the big picture: Epstein has been accused of sex trafficking hundreds of underage girls to his buddies, a circle of friends which included the president, who is also well known for his penchant for much younger women.

Thanks @JimCarrey #DumpTrump Where is the human decency in our White House? @gop YOU SUCK- Former republican here- You are a disgusting reprehensible party, lacking compassion, decency, and heart. https://t.co/ORqepB6l5Z

If this angers you it’s because the truth hurts sometimes. Keep doing what you do Mr Carrey.

LET US NEVER FORGET THIS TOO… @JimCarrey pic.twitter.com/JcLWfRpI5h

Today, when asked by reporters, Trump said that he knew Epstein from Palm Beach circles, but that the two had a falling out a long time ago.