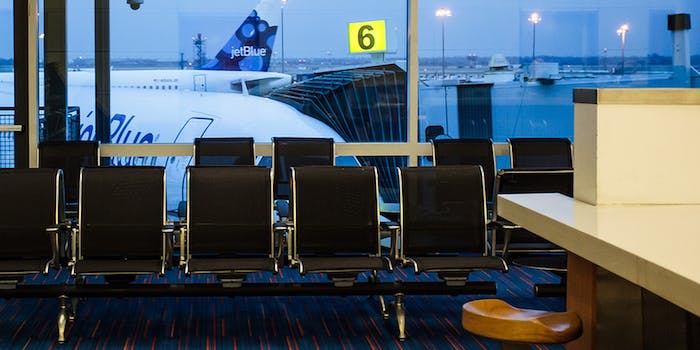 At this point, two things are utterly clear: The first is that nothing good can come of tweeting about an airline. The second is that people will never, ever stop tweeting about airlines.

Lisa Carter-Wright, like the dad kicked off a Southwest flight this summer for posting about a rude gate agent, had an air travel experience she wanted to share via social media: Her plane was momentarily grounded due to a bizarre spat about the pilot’s sobriety.

JetBlue, you will be shocked to hear, did not much care for this line of publicity.

Jet Blue just denied me to board the aircraft due to my social media coverage of tonight’s events. The pilot and staff denied service to me.

Jet Blue denied me access tonight to a flight home to my three children.Thanks for supporting single working mothers.#philyjetblue760

@LaurenDawnFox29 I’m due to fly out this morning. Still no official response from Jet Blue as to why they denied me service on flight 760.

Carter-Wright told local news affiliate WPVI-TV that the incident was sparked by a misunderstanding: “We had been waiting an hour, so there was a joke by another passenger, that it’d been a long night and he hoped there was a fully-stocked bar on the airplane,” she said. “And the pilot immediately ran out and said, ‘That’s it, everybody back up at the gate. I’ve been accused of being intoxicated.’”

In an official statement, JetBlue backed the pilot’s version of events: The flight “experienced a delay prior to departure due to a customer’s accusation of a pilot being intoxicated. As a precautionary measure, a sobriety test was conducted. The test demonstrated the pilot was sober and as a result, he was cleared to perform his duties.”

We can only assume all this talk about booze was solely down to the fact that the plane was headed to Boston—most frequent fliers have moved on to Klonopin.