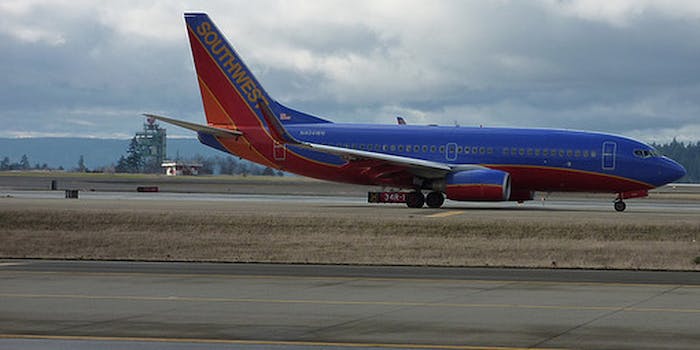 Dad gets kicked off plane for harassing airline via Twitter

Put your seat back in the full uptight position.

A Minnesota father of two is fuming after one of the companies he’s constantly tweeting at actually read what he had to say—and momentarily declined to provide him with their services.

Duff Watson, an Enterprise Account Executive at ExactTarget Marketing Cloud whose Twitter specialties include “Social | Cloud | Marketing | Musings | Opinions,” offered one of the latter as he tried to board a Southwest Airlines flight from Denver to Minneapolis: Watson, you see, is an “A-list” passenger, with all the priority boarding that entails, while his 6-year-old daughter and 9-year-old son are not. Therefore, a gate agent made all three wait to board with the commoners.

Watson vocally registered his displeasure at not being allowed to cram into a narrow metal tube five minutes sooner than everyone else, informing the agent that he’d be tweeting about this outrage. “Something to the effect of, ‘Wow, rudest agent in Denver. Kimberly S, gate C39, not happy @SWA,’” he told CBS. (That user is currently suspended, though it’s unclear if Watson was referring to the @SouthwestAir corporate account, which has not addressed the incident. Meanwhile, a dimwitted mob continues to angrily tweet at a handle that doesn’t currently exist.)

Shortly after the initial protest went out, Watson and his kids were informed that they would be forced to de-board if the tweet wasn’t deleted, as the agent now feared for her safety. “She said ‘I’m going to call the cops,’” said Lucy, Watson’s daughter. “I, like, thought something bad was going to happen, like my dad being in jail.” The family was briefly removed from the flight, though Watson finally capitulated, and they were allowed back on. The aftermath was predictable:

Unreal exp. Awaiting resp. from airline. Asked for name of rude gate agent. We board. I tweet. Kids & I pulled off unless I delete. AYKM?

@SouthwestAir WOW. Just wow with the response I just received from SW. “we apologize that you were asked to deplane after boarding.” Really?

The follow-up from the incident on Sun. with @SouthwestAir is now a double insult. Choose a kinder airline. #neveragain Family deplaned?

Although details have not been released, the offending employee has no doubt been reprimanded for telling a customer that she had to observe company policy. Watson and his children each received a $50 voucher, but more importantly, he has finally received a modicum of attention for tweeting about a brand, which appears to be his main hobby/raison d’être.

And how NOT to do customer care @DeltaAssist re: Case Number 12841455 From your agent: “You can locate the information on website.” #lame

And again, my instant-on @APPLEOFFIClAL iPad Air saves my hide in a presentation. C’mon PC! #ipad

@BWWings Thanks for the birthday love! Store#0069 rocks!

@SanukFootwear Why do these sandals make bubbles when they’re wet? Any ideas? #bizarre pic.twitter.com/zmFzktK5ju

We wish Watson well in his quest to never be mildly annoyed at an airport again.