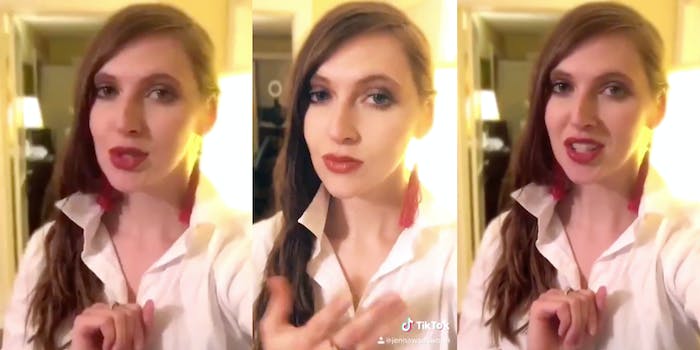 'People threatened to cut my brake lines. I haven’t been able to sleep at my home.’

The Democratic candidate for North Carolina agriculture commissioner said that she, along with her family and staff, is receiving death threats over an apparent celebratory video she posted to TikTok after President Donald Trump tested positive for the coronavirus.

Trump revealed his positive diagnosis on Oct. 2. According to White House doctor Sean Conley, he has since recovered. However, the president’s been criticized for how the U.S. has handled the pandemic and his personal lax approach to it. Trump has hardly ever been seen in public wearing a face mask or practicing social distancing, even holding packed rallies across the country with little to no safety measures in place. Following the announcement of his diagnosis, some celebrated that he faced consequences for his “reckless” actions and hoped it would change his handling of the pandemic.

Jenna Wadsworth, who is seeking to unseat longtime incumbent Steve Troxler (R) in November’s election, was apparently one of those people.

“Is this your favorite or most favorite October surprise in the history of electoral politics?” she asks in a TikTok video, seemingly referring to the announcement of Trump’s diagnosis. “For me, personally, I think it ranks pretty high up there. But, you know, love to hear your thoughts.”

Wadsworth later appeared to address the video on Twitter that same day.

“I will not allow my words to be twisted. I would never wish harm on anyone with this illness. I do want people to wear their masks & take the virus seriously—which is what I’ve been saying since day 1. I hope anyone contracting COVID recovers & is free of any long-term effects,” she wrote at the time.

“I have had my own personal safety and well-being—as well as my parents, my family, my staff—threatened,” she said. “People threatened to cut my brake lines. I haven’t been able to sleep at my home in over a week and a half.”

Wadsworth has since deleted the video and is reportedly taking additional safety measures after the threats.

“I mean, if I could have done all of this again, would I have filmed the video? No,” she told CBS 17.