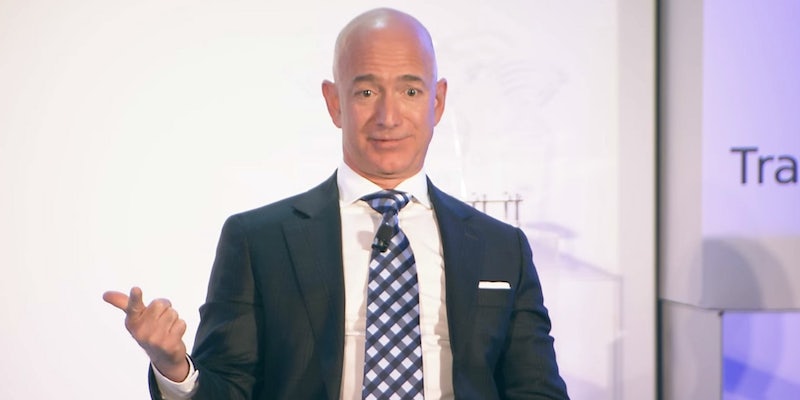 It could happen in your lifetime.

Jeff Bezos thinks there will be settlements on the moon. And not just in the distant future. The Amazon CEO and billionaire is talking about this becoming a reality relatively soon.

He looks at Earth’s lunar partner and sees a place where humans can move heavy industry.

“The Earth is not a very good place to do heavy industry. It’s convenient for us right now,” Bezos told Geekwire’s Alan Boyle at the Space Development Conference. “But in the not-too-distant future—I’m talking decades, maybe 100 years—it’ll start to be easier to do a lot of the things that we currently do on Earth in space, because we’ll have so much energy.”

Bezos said the Earth could be set up for residential and light industrial use. But since the moon has access to the sun at all hours of the day and water beneath the surface, that would make for an ideal environment for heavy industrial use.

“It’s almost like somebody set this up for us,” he said.

Bezos said Blue Origin, his private space company, will work with NASA and the European Space Agency to get to the moon and make it a worthwhile idea and investment.

In the short run, Blue Origin’s objective is to reduce the cost of access to space — initially with its New Shepard suborbital spaceship, and then with its orbital-class New Glenn rocket in the 2020s.

In the long run, Bezos’ vision is to smooth the way for millions of people working in space. Those people just might live and work in hollowed-out asteroids — a concept that was proposed decades ago …

The way Bezos sees it, moving heavy industry into solar-powered space outposts is the only way to ensure that our planet can cope with the rising demand for energy, and the stress that growing populations will put on Earth’s environment.

Said Bezos: “We will have to leave this planet. We’re going to leave it, and it’s going to make this planet better. We’ll come and go, and the people who want to stay, will stay.”