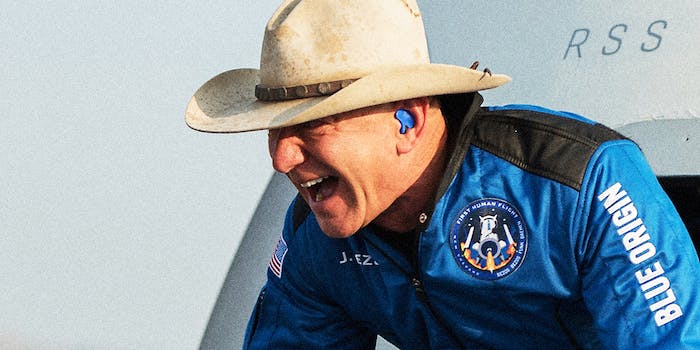 Is it more evil now?

A trending TikTok video shows the unusual progression of Amazon founder and former CEO Jeff Bezos’ laugh, which seems to be increasingly diabolical. Bezos’ has long been accused of being a supervillain, and this video hilariously details a principal attribute of those evil people.

It was posted by the satirical TikTok account @ceo_jeff_bezos_official; the video sequences Bezos’ laughter from the start of his rise as Amazon’s founder. The overlay asks: “Has Jeff Bezos laugh changed as he’s gotten richer.”

First, he’s shown, still with hair, in early interviews as Amazon became an expanding household brand and his wealth grew.

The “60 Minutes” clip is notable (and without context) as he apparently laughs by himself, as the host appears highly skeptical of Bezos. Then, he’s shown in a well-fitting tux with a shaved head. His laugh carries slight changes, going from a Home Depot dad laugh into a somewhat deeper tone, similar to a less hyperbolic Skelator from the He-Man animated series. Throughout, quick cuts show the growth of Amazon and the ongoing explosion of his personal wealth.

It continues with interviews with Charlie Rose and him doing magic tricks with David Blaine. Bezos also appears to laugh as a nervous reflex, just as he occasionally leans forward. But at the end of the video, he’s got the full-on villain laugh as he plays around in robotic arms. But all the laughs are situational. People laugh differently at different things, in varying body positions.

“Dudes becoming a villain,” said one person. “Jeff Bezos laughing like this every time we place an order,” said another. One called him a “real life Lex Luther” because of his bald head.

“It’s a crime to be that rich and not help the poor who are overworked, exploited, and underpaid,” wrote another commenter.

@ceo_jeff_bezos_official responded, “It’s his money bro, he can spend it how he wants.”

The funniest and perhaps most accurate comment on Jeff Bezos’ laugh: “Sounds exactly the same, just in bald.”