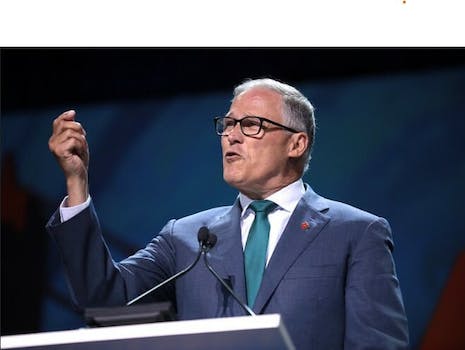 Amy Klobuchar was not amused

At tonight’s first round of the 2020 Democratic presidential debate, former Washington Gov. Jay Inslee grabbed the spotlight in the middle of a healthcare policy debate.

Rather than dig into socialized medicine, single payer, and such, Inslee bragged he was the only candidate to sign legislation granting women greater freedom of choice.

Sen. Amy Klobuchar (D-Minn.) had a comeback at the ready. She interrupted Inslee to point out that she was pretty sure that all three women onstage had “fought pretty hard” for reproductive freedom.

Twitter was less than impressed by Inslee’s mansplaining about women’s right to choose.

“Yeah, Inslee suggesting he’s the obvious champion for choice (because of state legislation he signed, apparently) on the stage with three women standing there was … a choice,” the Justice Collaboration adviser Chris Geidner tweeted.

Inslee: "I'm the only candidate who cares about women's choice!"
Warren, Klobuchar, and Gabbard: "……" #DemDebate

Gov. Jay Inslee to everyone: pic.twitter.com/YukeGYE6F3

For what it’s worth, Inslee has called for abortion to be a civil right.

Still, perhaps women are best positioned to sound off about women’s rights.