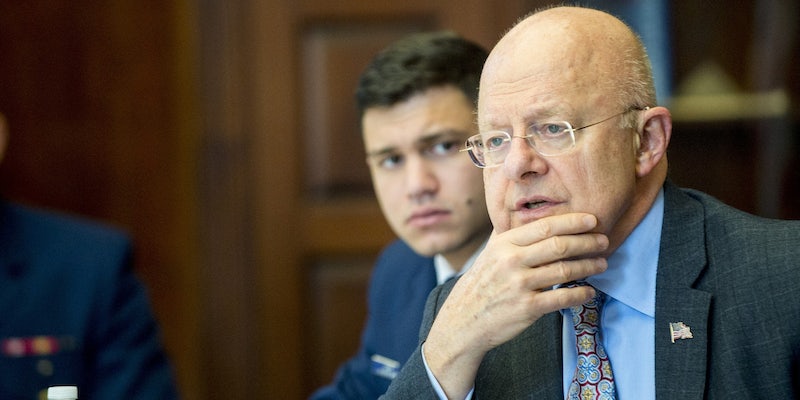 Photo via US Coast Guard Academy/Flickr

Clapper has some choice parting words for Edward Snowden.

America’s top spy since he was appointed by President Barack Obama in 2010, Clapper oversaw the operations of 17 intelligence agencies, including the Central Intelligence Agency (CIA) and National Security Administration (NSA). His resignation comes as President-elect Donald Trump is reportedly struggling to fill key national security and intelligence positions in his forthcoming administration.

Clapper’s legacy as director was greatly marred by revelations of domestic spying brought to light by former NSA contractor Edward Snowden, as well as allegations that he perjured himself in March 2013, when he claimed that NSA did not collect any type of data on millions of Americans. “The popular narrative is that I lied, but I just didn’t think of it. Yes, I made a mistake, but I didn’t lie. There’s a big difference,” Clapper told Wired in an interview published on the day of his resignation.

“Yes, I made a mistake, but I didn’t lie. There’s a big difference.”

“I’m quite sure that will be in the first line of my Washington Post obituary,” Clapper also said, referring to his 2013 testimony. “But that’s life in the big city.”

Clapper said he is convinced that had NSA requested authority from Congress to carry out the PRISM surveillance program, which collected internet communications from major U.S. internet companies, it would have been authorized. “We could’ve gotten legislation to drive a truck through,” Clapper told Wired. “I’m convinced that if we’d explained the program and the need, Prism would have been no more controversial than the FBI storing millions of fingerprints.”

Snowden, who leaked a trove of classified NSA material to reporters in 2013, has claimed that Clapper’s response to questions over domestic surveillance from Senators Tom Udall and Ron Wyden, who serve on the U.S. Senate Select Committee on Intelligence, ultimately motivated him to disclose top secret NSA documents and flee the country. “He’s tried to sell that story,” Clapper said in the interview, “but it’s bullshit.”

Clapper also claims that legislation passed in the wake of the Snowden leaks only served to increase the NSA’s access to U.S. citizens’ data. “Instead of the NSA storing the data, we go to the companies and ask them for it,” he says. “It actually gave us broader access across a broader range of providers than the original programs. If people think their civil liberties and privacy are going to be better protected by the providers, OK.”