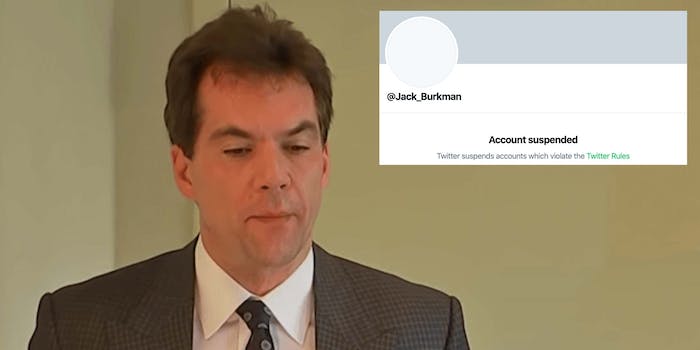 Right-wing operative Jack Burkman was suspended from Twitter on Thursday shortly after sending out a tweet about the coronavirus (COVID-19) pandemic.

Burkman, known best for his sham press conferences with fellow conservative provocateur Jacob Wohl, claimed to have inside information about upcoming food shortages across the country.

In now-deleted tweets, Burkman alleged to have been told by White House official Kellyanne Conway that major retailers were preparing to close its doors.

“Just got off the phone with Kellyanne Conway,” Burkman said. “The President is nobly trying to keep open Safewat and Target stores but alas his efforts are in vain. Both will close all stores on Friday.”

Burkman followed up by adding that “the White House is making plans for food shortages in at least 32 states within two weeks” and that Americans would be fed by FEMA and the National Guard.

Popular left-wing Twitter account “Sleeping Giants” posted a screenshot of the tweets while noting that the platform had recently instituted new rules barring the spread of coronavirus misinformation.

“Hey @twittersafety @twitter @jack, just yesterday you instituted new rules around disinformation about the Coronavirus,” Sleeping Giants said. “How do these tweets not clearly break these rules? Instigating panic for food doesn’t count??”

There is no evidence whatsoever that Safeway and Target are planning to close their doors. There is also no evidence suggesting America’s food supply is in danger of depletion.

Twitter confirmed to the Daily Dot that Burkman’s account had indeed been suspended for repeatedly violating its rules, including its guidelines on false and deceptive claims related to COVID-19.