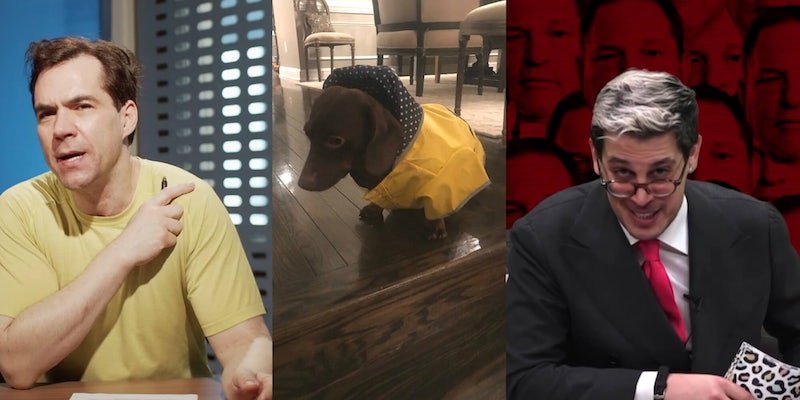 Jack Burkman says Milo Yiannopoulos is out to kill his dog, Jackie Jr.

Yiannopoulos is threatening to nail Jackie Jr. to a front door.

D.C. lobbyist Jack Burkman‘s dog seems to have found himself at the center of a feud between his owner and alt-right provocateur Milo Yiannopoulos.

“It’s very disappointing to see Milo Yiannopoulos threatening to kill Jack Junior. Especially disturbing with the backdrop of credible allegations that he commissioned the killing of Tim Gionet’s cats in 2016. Jack Jr. says he does not take kindly to threats,” Burkman tweeted on Saturday.

“It’s so hard to find someone in Washington DC prepared to kill a debtor’s dog, doesn’t matter how much money you offer them,” Yiannopoulos wrote on the platform that is heavily used by far-right figures.

In another screenshot, Yiannopoulos mentions Jacob Wohl, another far-right troll who is an associate of Burkman. Wohl and Burkman regularly take part in smear campaigns against politicians. Burkman allegedly owes the former Breitbart writer a big check for an appearance at one of the duo’s circus-like press conferences in October of 2019. Burkman told the Daily Dot that while the amount of money owed is “confidential,” it’s a “small sum of money.” At the press conference in question, Yiannopoulos said his fall from grace was so hard that he resorted to being a personal hairstylist for Wohl.

“Ok DM @RealJacobWohl and ask him if he wants his friend’s dog nailed to the front door or he prefers a war of words online and let me know what he says,” Yiannopoulos wrote in a since-deleted message.

Gionet, better known as Baked Alaska, previously managed Yiannopoulos. It is unclear when or why things soured between the two and what happened to the cats Burkman is referencing.

The Daily Dot was able to confirm the authenticity of Yiannopoulos’ messages.

Burkman also attached a photo of Jackie Jr. a Dachshund dressed in a yellow raincoat.

The tweet got ratioed, with many horrified for Jackie Jr.’s safety and sad he got mixed up in the quarrel.

“I’m rooting for the dog. He doesn’t deserve this. The little doxie needs to get away from Jack. He deserves better,” Twitter user @nicole662105650 wrote.

Another tagged the American Society for the Prevention of Cruelty to Animals (ASPCA).

Burkman spoke to the Daily Dot early Sunday morning regarding the “terroristic threats against his dog,” calling them a “terrible shame.” He also called Yiannopoulos, his once-ally, a “very sick” person.

Burkman said he plans to get the Arlington Police Department involved.

The Daily Dot has learned that Jackie Jr. not only belongs to Burkman but his wife, Susan Burkman, as well. When asked about Susan’s worry for Jackie Jr., Burkman said that he had no comment but has hired private security for himself, Jackie Jr., and Wohl.

The Daily Dot has reached out to Yiannopoulos and the Arlington Police Department for comment.