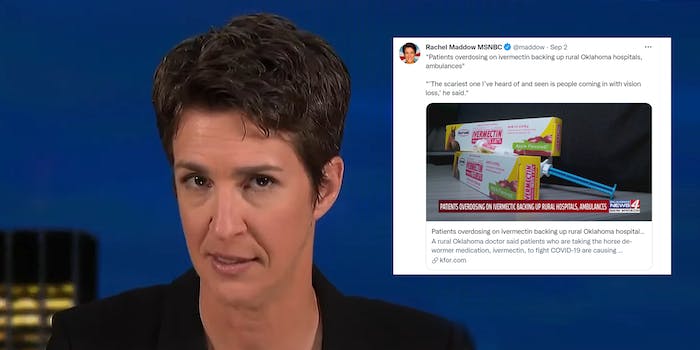 Gunshot victims are not being turned away at hospitals because of ivermection cases, despite viral stories

'That it’s still up on Twitter is a crystal clear example of how Big Disinfo is a political construction, not an empirical framework.'

An Oklahoma doctor got on local television with terrifying news: so many people are suffering complications from taking ivermectin—a drug that is sometimes used to deworm horses—that other patients cannot get care.

There were so many ivermectin overdoses, Dr. Jason McElyea claimed on TV last week, that “gunshot victims were having hard times getting to facilities where they can get definitive care and be treated.”

The story, first reported by Oklahoma’s News 4, blew up. MSNBC’s leading journalist Rachel Maddow tweeted it. The Guardian, Rolling Stone, and other major outlets picked it up.

It is true that the drug can be dangerous. With a host of celebrities and conspiracy theorists falsely claiming its efficacy, poison control centers have reported an increase in the number of calls related to consuming the drug. And the CDC is warning against its use, the New York Times reported.

But this particular story may be exaggerated, according to a health system that employed Dr. McElyea.

Northeastern Health System – Sequoyah put out a statement after the article was published saying that McElyea was affiliated with the group, but “has not worked at our Sallisaw location in over 2 months.”

The statement said it had not treated any patients for complications related to ivermectin use, including any overdoses.

“All patients who have visited our emergency room have received medical attention as appropriate,” the statement said. “Our hospital has not had to turn away any patients seeking emergency care.”

Both the Guardian and Rolling Stone issued updates to their stories, but Oklahoma’s News 4 has not edited its story and Maddow’s tweet was still posted as of Tuesday morning.

Neither the station nor MSNBC responded to a request for comment.

Dr. McElyea could not be reached at the number listed as his U.S. News and Health contact.

Local Fox station KOHK reported that Integris Health, which told the station McElyea was an employee, has seen some patients who were taking ivermectin.

“And while our hospitals are not filled with people who have taken ivermectin,” they told KOHK, “such patients are adding to the congestion already caused by COVID-19 and other emergencies.”

Integris Health did not respond to a request for comment.

On social media, some criticized the article for being misleading and including COVID disinformation.

Joe Bernstein, a Nieman Foundation Fellow and BuzzFeed tech reporter, who recently wrote a well-received essay on disinformation, tweeted: “That it’s still up on Twitter is a crystal clear example of how Big Disinfo is a political construction, not an empirical framework.”