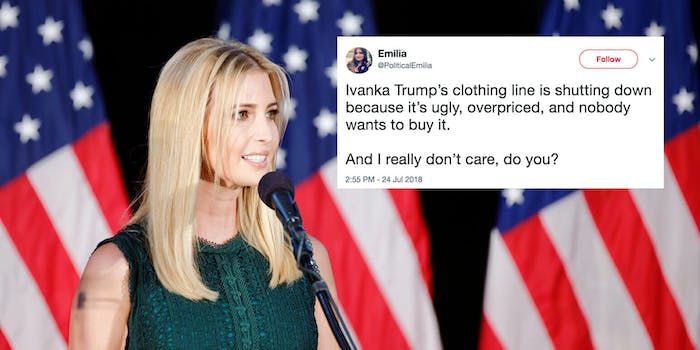 'So now the empress has no clothes either.'

Ivanka Trump’s fashion line is shutting down so she can focus on her White House duties, and shockingly, pretty much no one is sympathetic.

In a statement to NBC News, Trump said she does “not know when or if” she will ever revive the company, which shares her name.

“I do know that my focus for the foreseeable future will be the work I am doing here in Washington, so making this decision now is the only fair outcome for my team and partners,” Trump said in the statement.

The clothing line has been a source of controversy, as it appeared to conflict with President Donald Trump’s “America first” approach and trade policies. The company also faced boycotts and weak sales that pushed big-name retailers to drop her brand.

Good to know that Ivanka Trump has the same abilities of her father in terms of running companies into the ground.

BREAKING- Ivanka Trump is shutting down her clothing and jewelry line to focus more on being a feckless country.

Ivanka Trump was to fashion what Chi‑Chi's was to Mexican food.

Faced with plummeting sales and retailers bailing faster than the crew of Titanic, Ivanka Trump announced today that she is closing her fashion brand.

So now the empress has no clothes either.

Some people were able to muster up the same amount of care that Ivanka Trump’s stepmother Melania had when she got dressed to visit immigrant detention centers on the border.

Ivanka Trump’s clothing line is shutting down because it’s ugly, overpriced, and nobody wants to buy it.

And I really don’t care, do you?

Others cared way more—for the immigrant kids separated from their parents, not for the loss of the fashion brand.

My thoughts on Ivanka Trump shutting down her fashion brand is that, Jesus fucking Christ, she's part of an administration that has deported nearly 500 migrant parents who were separated from their kids and may never see them again.