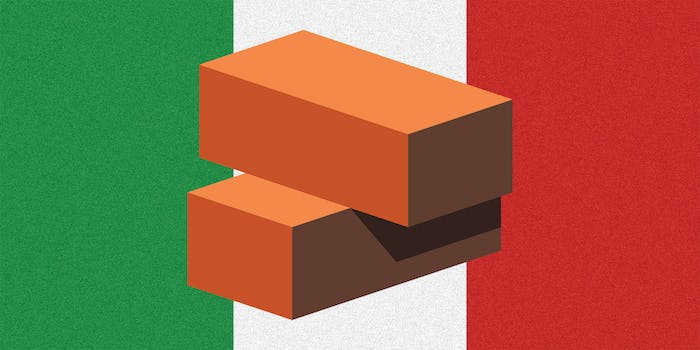 How the Italian far-right is trying to break Twitter

And what's up with all the bricks?

The first time a bunch of bricks successfully broke Italian Twitter was Feb. 16, 2021. Out of the blue, untethered from the news of the day, the hashtag #BastaLockdown (#EnoughWithTheLockdown) soared to the top of the country’s Trending Topics list. Digital strategist Pietro Raffa soon realized something weird was going on: the hashtag had actually been boosted by just 357 profiles, and the three most active profiles behind it had used it almost a thousand times each over the span of a few hours. Even weirder, all of them had a brick emoji (🧱) in their username.

It was a textbook case of tweet bombing, a social media tactic that marketers and digital activists have been using to manipulate the Twitter algorithm for years: by publishing mountains of content under the same hashtag, a handful of profiles can get a precise topic trending, and sow the seeds for attention that comes with it. #BastaLockdown, for instance, caught the attention of journalists and right-wing politicians, including Lega MEP Angelo Ciocca, whose party is currently part of the governing majority in Italy.

But a question lingered: What was up with all the bricks?

The question haunted several Twitter commentators, who began to interrogate the identity and the real intentions of a collective that evidently shared a system of linguistic codes and symbols. Aside from the 🧱 in their usernames, these profiles used a series of standard phrases. They described anyone who published news or insight on their group as “soy Sherlock Holmes,” winking at the far-right belief that the high level of phytoestrogens contained in soybeans makes men more feminine. They regularly pretended the operation was first launched in an nonexistent Twitch stream. And, in some cases, they included a Niger flag emoji in their bio—a gimmick introduced by neo-Nazi blog Daily Stormer as a trolling action against the moderation policies of social networks against the N-word.

An initial hypothesis thought the bricks were an ironic reference to the “costruttori” (“builders”), a word that Italian president Sergio Mattarella used in his end-of-the-year address on Dec. 31, 2020 to define politicians who wanted to join forces to build a better future for the country. On Feb. 18, Italian Twitter user Mazzetta floated the theory that the use of the brick emoji was a reference to the American alt-right, a loose collection of conservatives that harbour white supremacist and antisemitic views. Mazzetta pointed out that the same emoji had been used by alt-right users in 2018 to hate on anti-Donald Trump journalists, after a far-right podcaster asked followers to “brick a journo.”

Riding the wave of curiosity, the enigmatic brick accounts struck back by launching another hashtag including a made-up word: #SiamoTuttiMattonisti (#WeAreAllBrickists), parodying the political hashtag that become popular after a terrorist attack against French satirical magazine Charlie Hebdo sparked a wave of #JeSuisCharlie posts.

That operation, though, was in line with the real reason they decided to go with the 🧱 emoji in the first place. The mattonisti are hell bent on breaking the Italian internet the same way a brick destroyed a washing machine in one of the web’s most viral videos. Time and again, that’s what they’ve managed to do, gaming the platform into a weirder and more inhospitable place than usual along the way.

This approach is anything but unprecedented, notes Baylor University professor Scott Varda, who has been analyzing the online communication tactics of the alt-right.

“The alt-right, despite its ostensible denunciation of globalization, is quite globalized. The American alt-right learned and learned from the European far right, and vice versa. Both of them practice modes of propaganda developed even before World War I. American and German propagandists of the early 20th century laid the foundation for memetic propaganda today,” he explains. “To my mind, this Italian campaign is both ‘old’ in its similarity to American alt-right efforts, and ‘novel’ in that it takes those techniques and repurposes them in a different context.”

As with #BastaLockdown, the mattonisti keep “breaking the Internet” by coordinating on a Telegram channel to boost pre-established hashtags until they turn into trending topics in Italy. In February, Italian online newspaper Facta reported that the Telegram group counted at least 500 people, who pick the hashtag they’re going to boost next through polls. Months later, the mattonisti’s Telegram channel counts almost 900 members. Almost 900 initiators of social trends whose buzzwords are ready to be amplified by thousands of users with bricks in their names.

Most of these hashtags reflect key reactionary cultural battles, from racism and homotransphobia to the rejection of vaccines and social distancing rules. Some notable examples have included #Proteggiamole (#LetsProtectThem), which affirms the biological superiority of men over women; #VacciniKiller (#KillerVaccines), which highlights the alleged danger of vaccines against COVID-19; #Dldittatura (#LegislativeDecreeDictatorship), against the 10pm curfew imposed by the Italian government; and #IoStoConOrban (#ImWithOrban), to show support for the homophobic laws the Hungarian government recently passed. The group also organized a social boycott campaign against Zero, Netflix’s first series that centered on Black characters and used the hashtag #WhiteBoySummer to spread ideas close to white supremacism.

The particular use of hashtags alongside regular shitposting tactics has been tried in the U.S. before, as professor Heather Woods, co-author of Make America Meme Again: The Rhetoric of the Alt-right, said.

“We’ve seen counter-campaigns that latch on to hashtags to redefine social justice movements in a new light. An example of that is #handsupdontshoot, which was calling out police brutality against Black people and other people of color, and was co-opted by #pantsupdontloot, which used racist stereotypes to categorize Black folk,” Woods said.

In their manifesto, the mattonisti state that they reject the far-right label, defining themselves as “post-post ideological” people striving to “reshape the ideologies of the twentieth century in a post-ironic key.” Considering their clear political inclinations and their profound knowledge of online mechanisms, though, several commentators see the mattonisti as yet the latest attempt to apply the American far-right’s online tactics to an Italian audience.

“Memes are hyper-effective communication tools that slingshot messages from niche, fringe parts of the internet to the mainstream. They are important because they help spread ideas from those niches or ‘enclaves,’ sometimes making very radical ideas appear palatable,” Woods explains. “Memes can also sow discord and prompt outrage—that outrage can be used strategically to invite media coverage (and coverage of the coverage), further expanding the meme’s message. Sometimes the memes’ sole purpose is to prompt outrage, which can encourage virality and also help collectives like the alt-right argue that the left is intolerant or politically correct.”

The result of the mattonisti’s mobilization often ends up being extraordinarily effective: These hashtags get regularly picked up by prominent politicians as well as the national media, which usually covers them as genuine “battles born on the web,” often without realizing they were artificially created by a small minority of Internet-savvy, organized users.

The hashtag #SoloDueGeneri (#OnlyTwoGenders), created with the intention of denying the existence of gender identities outside the binary opposition between man and woman, is a perfect example. The coordinated campaign received enormous public response and it ended up being used by Lega Senator Simone Pillon, who has been at the forefront of the far-right’s fight against a presumed “gender ideology”. The next day, right-wing national newspaper Il Giornale titled an article “#SoloDueGeneri goes viral, and the progressives are scandalized.”

In another case, one of their hashtags, #VogliamoVotare (#WeWantToVote)—calling on President Sergio Mattarella to dissolve the parliament and call new elections—was picked up by Lega leader and former Minister of the Interior Matteo Salvini. National newspaper Il Secolo d’Italia published an article titled “#VogliamoVotare on Twitter: why doesn’t Mattarella listen to Italians?” reading the trending topic as an expression of popular will.

In late June, as several national football teams playing in the European championship took the knee during the national anthem in a gesture of solidarity for the #BlackLivesMatter movement, the mattonisti struck again with #Iononmiinginocchio (#IDontKneel), which ended up both in the Trending Topics, in tweets by elected Lega MEP Silvia Sardone and MP Claudio Borghi, and on the profile of one of Italy’s main progressive intellectuals, Roberto Saviano, who published a video criticizing the hashtag.

“These online coordinated campaigns do several things, but two of them stand out: they help build group cohesion (which is especially important for such a loosely affiliated community), and they help move the Overton window toward their preferred side,” said Varda.

“In their view, messages that affirm alt-right sensibilities, or anger perceived opponents—be they moderate conservatives, liberals, leftists, or racial or sexual minorities—are necessary and good”.

“Memes are vital to the propagation of far-right views both to those who are already primed to receive those political messages, but also to audiences beyond those immediate members,” she added. “They’re perhaps the near-perfect tool for our networked world.”