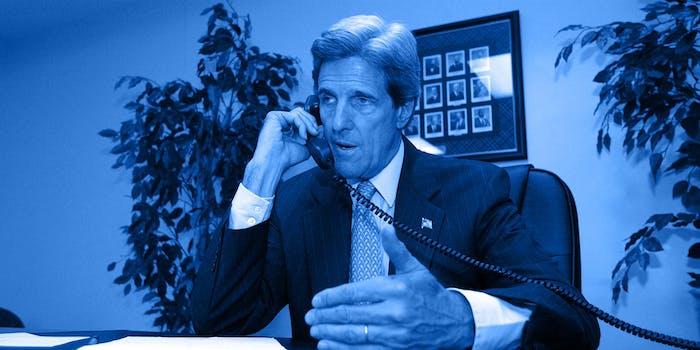 All is fair in love and war, apparently.

At times, Kerry didn’t encrypt his conversations with negotiators, which allowed Israel and at least one other country’s spy agency to intercept some of his phone calls, Der Spiegel reported. The Israeli government is said to have used the information somehow, though the magazine offers no specifics.

The 2013-2014 Israeli-Palestinian peace talks ended this spring after Israeli Prime Minister Benjamin Netanyahu suspended negotiations in reaction to the announcement of a unified Palestinian government—the result of renewed diplomacy between Fatah and Hamas.

“Israel will not negotiate with a Palestinian government backed by Hamas, a terrorist organization that calls for Israel’s destruction,” Netanyahu’s office said in April.

The escalation of Israeli military force in Gaza has been viewed by some as an attempt to derail the Hamas-Fatah reconciliation. Following the West Bank killings of several Palestinians protesting the conflict in Gaza, however, an unnamed Hamas official told Haaretz: “The reconciliation government will not be dismantled and Hamas has no intention of returning to a divided Gaza Strip and West Bank, or to a split in the two main political movements.”

During a speech at the Center for American Progress, Kerry responded to the criticism, but offered no apologies: “Make no mistake, when the people of Israel are rushing to bomb shelters, when innocent Israeli and Palestinian teenagers are abducted and murdered, when hundreds of innocent civilians have lost their lives, I will and we will make no apologies for our engagement.”