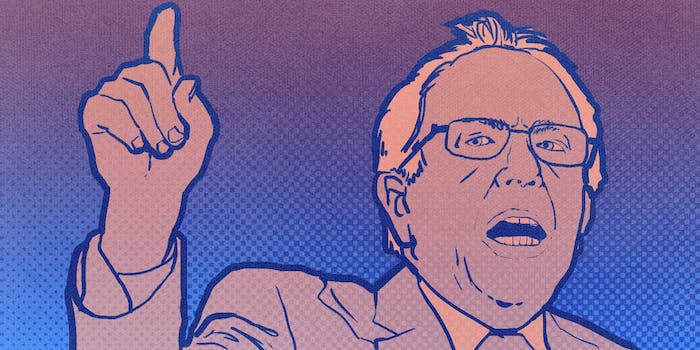 Bernie Sanders paints his opponents into an Iraq War corner.

Iran and Iraq are more than just ancient neighbors.

The two countries have been at the center of the American War on Terror, to varying degrees, during the last 14 years. Iraq was the site of an American invasion and Iran was dubbed a member of the “Axis of Evil.”

On Wednesday, President Barack Obama’s nuclear deal with Iran was at the top of the national political agenda as a group of conservative activists and Republican presidential candidates held a rally in Washington against the international agreement.

Online, Democratic presidential candidate Bernie Sanders struck back, saying it was easy to draw a direct line between the people attempting to thwart the Iran deal and those who said the U.S. needed to go to war with Iraq.

Those who have made every effort to thwart the diplomatic process, are the same who spoke out forcefully on the need to go to war with Iraq.

Is it true that the people who pushed and voted for the Iraq War in 2003 are the same pushing against a diplomatic deal with Iran in 2015?

Iraq back then and Iran today

One of Wednesday’s headliners was Sen. Ted Cruz (R-Texas), a vocal opponent of the Iran deal and a 2016 Republican presidential candidate.

These days, Cruz says “of course” going to war in Iraq was a mistake “knowing what we know now.” But Cruz, a crucial member of the George W. Bush administration’s early days, supported the war in 2002 based on what he now calls “false” intelligence reports about weapons of mass destruction in the hands of Saddam Hussein.

Jeb Bush, another 2016 Republican rival, has had an even tougher time facing questions about Iraq. After all, it was his brother in the White House who went to war. This year alone, Bush has gone back and forth between calling the war “a pretty good deal” and then, upon receiving heaps of criticism, turning around to say he would not have launched the war.

Jeb Bush, whose campaign advisers include Iraq War co-architect Paul Wolfowitz, has only recently publicly criticized the war to any extent.

The Republican Party led the march to war in 2002 when it occupied the White House and provided 70 percent of the congressional votes that authorized the war.

Almost every Republican still in office from 2002 to today was in favor of the Iraq War and is now opposed to the Iran deal. Majority Leader Mitch McConnell (R-Ky.) and Sen. John McCain (R-Ariz.) have vocally opposed the Iran deal while both voted for the Iraq War.

On the other side of the aisle, things get more complicated.

Sen. Chuck Schumer (D-N.Y.) is the most prominent Democrat against the Iran deal. In 2002, he voted for war with Iraq along with 28 other Democratic senators.

Hillary Clinton, a New York senator in 2002, voted for the war but now asserts she “got it wrong. Plain and simple.” Now, as a 2016 Democratic presidential candidate, Clinton is in favor of the Iran deal.

Vice President Joe Biden was a Delware senator in 2002 who voted for the war with Iraq. Today, he’s one of the chief architects of pushing the Iran deal through congress.

Sanders, the only independent in congress at the time, voted against the war.

As usual, the truth is more nuanced than a short tweet can get across. But the overarching spirit of what Sanders wrote is undoubtedly true.