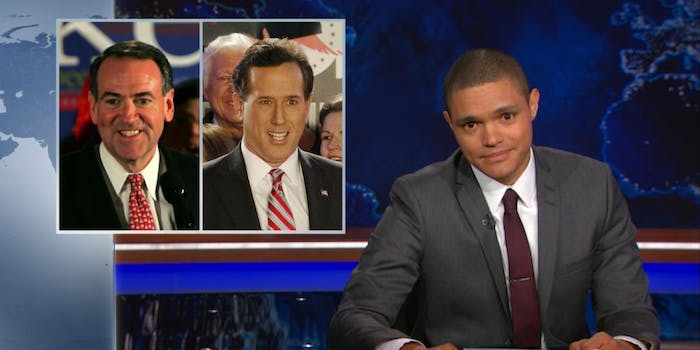 Iowa GOP freezes ‘The Daily Show’ out of public event, will probably regret it now

The Iowa GOP blocked The Daily Show from a public event. Needless to say, this plan backfired.

Will politicians ever learn that it’s a bad idea to antagonize The Daily Show? Judging by the Iowa Republican Party’s decision to block Trevor Noah‘s correspondents from a public event, all signs point to “no.”

The Daily Show was denied access to the “Growth and Opportunity Party” event in Des Moines, Iowa, this week, with Iowa GOP Chairman Jeff Kaufmann citing concerns that Noah and his correspondents might “make fun of Iowa.”

Astonishingly enough, Noah still managed to make fun of Iowa and the 2016 Republican presidential nominees without actually attending the event in person.

“I don’t want to make fun of Iowa,” Noah agreed. “If anything, I’m impressed by how much political power they have when they’re as successful at picking the right person as John McCain.” Ouch.

Looks like the Iowa GOP’s anti-Daily Show plan backfired massively. Who could have predicted that?