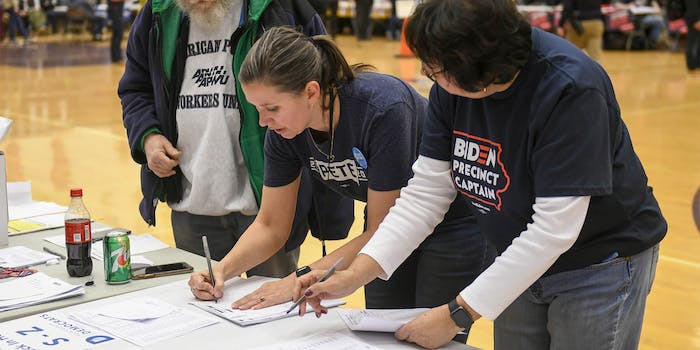 What we know about Iowa’s ill-fated caucus app

The voting results in Iowa were delayed last night, and a new app is getting a large share of the blame.

The first major vote of the 2020 presidential election occurred Monday, as Iowa natives gathered to vote on the 2020 Democrats.

As the time came for votes to be counted, however, issues began being reported.

The app, which has not yet been named in the interest of security, although numerous reports are saying the company behind it is known Shadow, was announced as Iowa’s chosen vote-tracking method in January. The technical specs of the app, as well as its developer, were kept quiet in hopes of protecting the process. Iowa officials chose a smartphone app, rather than more traditional vote-counting methods.

Iowa’s complicated caucus process involves a different procedure from more traditional primaries. In most states, voters cast ballots in a primary, much as they would in a general election. In Iowa, however, caucusgoers gather at rec centers, churches, and gymnasiums to show their support for a candidate. To cast their vote, attendees physically stand in their preferred candidate’s area. The results for each candidate are then calculated and sent on to the party. The app was intended to ease this process, and get results of the vote out to the public faster.

Fears around voting security are at an all-time high, and officials banked on the idea that the app would speed the process without a hitch.

Unfortunately, hours before the vote was set to be called, people were experiencing problems. According to HuffPost, precinct captains struggled to download the app.

The app was supposed to make reporting the results easier and quicker. But on Monday, numerous Democrats in Iowa reported major problems in attempting to download the application and upload results, with many saying they resorted to calling the results into state party headquarters in Des Moines.

The New York Times said there was difficulty with a wonky process for entering security codes.

Some precinct leaders in his county were unable to properly enter a security code to download and access the app, let alone submit results.

[The] process was confusing for those who tried. It involved inputting a series of forms and links and security codes. Only one person at a precinct could be authorized to submit results through the app.

Tech Crunch reported that screenshots of the app being buggy and having crashed were floating around Twitter, but have since been deleted.

A few hours before results were set to be announced, reports began floating around that the app may be problematic.

However, in statements into the evening, the communications director for the Iowa Democratic Party, Mandy McClure, noted that while “inconsistencies” were found “in the reporting of three sets of results,” the app was not to blame. She noted it did not go down.

Officials in Iowa did ensure that multiple methods were available to tabulate results.

“We are also using photos of results and a paper trail to validate that all results match and ensure that we have confidence and accuracy in the numbers we report,” her statement reads. “This is simply a reporting issue, the app did not go down and this is not a hack or an intrusion.”

As McClure noted, an accurate count should still be entirely possible, despite issues with the app. The delay is the result of needing to rely on the more traditional—and much slower—methods of calculating votes. Precinct chairs throughout the state could still get their results to the party via a call-in number.

Unfortunately, needing to do so completely negates any assistance the app was intended to give. Precincts reported delays in calling in their results to the party.

An NPR report from mid-January outlined Monday night’s issue as a possibility back when the app was announced.

“If the app doesn’t work, either because a denial of service attack clogs the system or for any other reason, then there could be confusion at precincts across the state, and a potential delay on a winner being announced,” NPR reported.

There are likely more delays in store, as several groups have demanded a lengthier process. Joe Biden’s team wrote to the IDP, according to TechCrunch, and requested to see and examine the results before they are released to the public. It is likely to be far from the only delay.

In the wake of the results, Mayor Pete Buttigieg declared victory, a statement that he was walking back the next day on the morning shows.

The Iowa caucuses are an important first step in determining who will be the Democratic nominee for president. Over the course of the next several months, other states will vote to determine who will challenge President Donald Trump in the 2020 presidential election.

New Hampshire, the next state to vote, is up on Tuesday, Feb. 11.