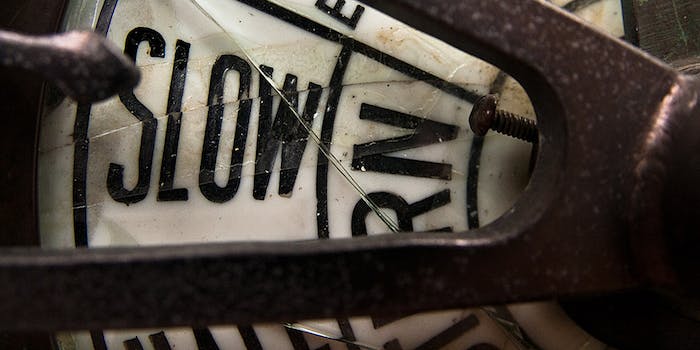 Internet Slowdown Day: What you need to know

Slowness? On my Internet?!

You may have noticed some strange pop-up ads calling on you to email the Federal Communications Commission (FCC) today—in fact, you might have seen it right here on the Daily Dot. But don’t worry—you haven’t been infected by some virus that’s forcing civic action down your throat. It’s nothing that scary—in fact, it’s really important. Here, we’ll explain.

It’s called Internet Slowdown Day, or the Battle for the Net. It’s a huge protest, across thousands of sites, with a three-pronged goal: Making you aware that net neutrality is in grave danger, teaching you what net neutrality is, and getting a lot of people to tell the government that they care about this issue.

Many of the participating sites are using the same widget to first-time visitors, which includes a “page loading” GIF. That’s to illustrate that without net neutrality, some sites might become unnecessarily, painfully slow to load.

Whoa whoa whoa. They’re not actually slowing their sites down today, are they?

No. At least, most sites aren’t, and that’s not what the GIF actually does. But if you’re easily annoyed by the Internet taking a long time to load, that’s exactly the point.

Ok, net neutrality. I’m already stifling a yawn. What is it, again?

It’s the only thing keeping the Internet from sucking in a particular way, and from you having to pay even more to be online. Sort of.

Right now, it’s illegal for Internet providers like Comcast and Verizon to charge extra for some websites to load at full speed. But the FCC, which has the authority, is debating whether to change that.

Getting rid of net neutrality means letting them charge more, and it means an internet that works on two or more tiers. The fear is that such a system would make surfing the Internet far more aggravating, cost you money, limit people’s access, and stifle new businesses. I don’t want to be presumptuous, but I don’t think you want that. If you like, John Oliver explains the same thing very well, and with far more F-bombs.

Ok, so net neutrality is good. Losing it would be bad. Why are we protesting now?

The FCC is a big, lumbering federal government bureaucracy, and part of how they work is that they often open up new proposals, like the current one about net neutrality, to comment from the public. Usually, that means a few trade representatives, and maybe a handful of consumers, will respond. But since net neutrality is so fundamentally important to the Internet, and thus to so many people, the FCC passed the one-million comment mark back in July. And, they insist, they really are listening to comments.

The final day to comment with the FCC is Monday, Sept. 15, so this protest is designed to make one final, big push.

It’s really the work of four advocacy groups: Demand Progress, Free Press Action Fund, Engine Advocacy, and Fight for the Future. You may know the last one from being so involved in other Internet freedom protests, like getting the one rolling against the Stop Online Piracy Act (SOPA) in January 2012.

If I do this protest thing and sign up, who am I sending a message to? What am I putting my name on?

The letter is on the protest’s website; you can read it before signing it. You put in your zip code, so it’s automatically sent to your representatives in Congress, as well as the FCC and the White House.

Does Amanda Palmer support Internet slowdown day? I’m only in if she is.