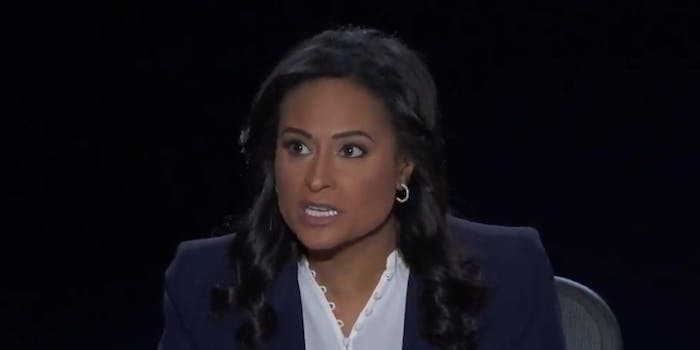 She was clearly the most poised person on the stage tonight.

The millions of Americans who tuned in for the last opportunity to see the candidates face off didn’t seem especially persuaded by either performance.

But one thing the internet was sure of: Kristen Welker of NBC News did an incredible job as moderator.

Moderating a presidential debate is a dangerous game. Often those who accept the challenge wind up on the losing side. Not Welker.

At the conclusion of the debate, Judy Woodruff of PBS complimented Welker’s “superb job tonight.”

Even President Donald Trump couldn’t help but express admiration for Welker’s performance. “I respect very much the way you’re handling this,” he said halfway through the hour-and-a-half debate.

“This sure as hell isn’t going to be the last time Kristen Welker moderates a presidential debate,” tweeted Charlotte Clymer.

Just about everyone else online chimed in with praise.

While it’s likely that supporters of each respective candidate will claim the victory, the internet agrees Welker is the true winner.