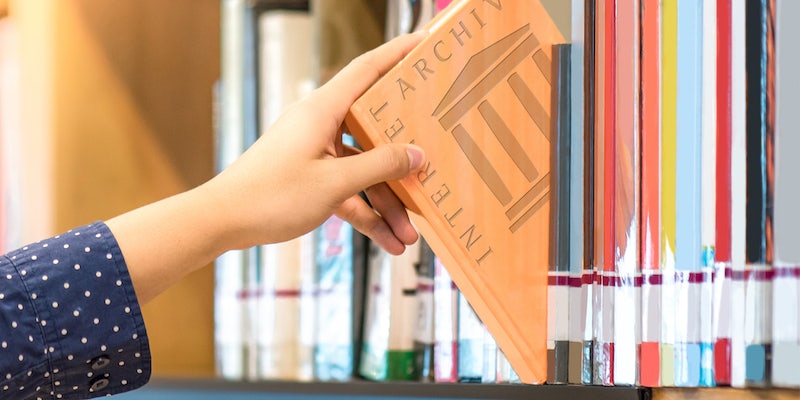 A benevolent act by the Internet Archive may spell its doom.

In the early days of the pandemic, as physical libraries, schools, universities, and bookstores closed—and people were restricted from leaving their homes with very few exceptions—long waiting lists developed to access popular ebooks at public libraries.

To alleviate that problem, the Internet Archive launched a short-term project. Dubbed the National Emergency Library, it allowed anyone who signed up—for free—to their website to borrow digital copies of 1.4 million books in their possession without a waiting list. Most of these materials were 20th-century books that the Internet Archive had previously digitized to make up for the lack of commercially available ebook versions.

The National Emergency Library was part of the Open Libraries initiative—a web-accessible public library containing the full texts of over 1.6 million public domain books as well as over 647,000 books not in the public domain.

In the Internet Archive’s announcement, published on March 24, 2020, digital librarian Brewster Kahle said that allowing anyone to borrow these 1.4 million books without a waiting list in a time of crisis “was our dream for the original Internet coming to life: the Library at everyone’s fingertips”.

Two years later, though, the Internet Archive’s dream is playing out as a legal nightmare.

Following public criticism from several writers, and accusations of “acting as a piracy site” by the Authors Guild, a group of major publishing houses sued the Internet Archive in summer 2020.

Hachette, Penguin Random House, John Wiley, and HarperCollins claimed that the Internet Archive’s Open Libraries initiative acted as an “unlicensed aggregator and pirate site” that operated to the detriment of authors and publishers.

Now, both the Internet Archive and the publishers are hoping to settle the matter without needing a full trial: both parties requested a pre-motion conference on a motion for summary judgment—meaning a federal judge will rule on the suit instead of a jury.

As both the Internet Archive and the publishers prepare for the next steps in the legal proceedings, the heavily publicized lawsuit is renewing worries about the significance and the future of the archive.

The matter seems far from resolved both from a legal and an ethical point of view: the applicability of copyright law in an age of infinite digital replicability itself is an enormous and ongoing point of contention that can’t be solved by a single lawsuit.

In this suit, the Internet Archive—represented by the Electronic Frontier Foundation (EFF)—argued that its Open Libraries initiative is basically equivalent to traditional library lending thanks to what is known as Controlled Digital Lending. According to this argument, the Internet Archive has been making digital copies of books that it physically owns, but only lending out the digital file to one user at a time, essentially replicating the experience of physical libraries only loaning a book to one person.

“The Internet Archive and the hundreds of libraries and archives that support it are not pirates or thieves,” EFF Legal Director Corynne McSherry recently stated. “They are librarians, striving to serve their patrons online just as they have done for centuries in the brick-and-mortar world. Copyright law does not stand in the way of a library’s right to lend its books to its patrons, one at a time.”

The National Emergency Library seemingly circumvented the Controlled Digital Lending system for a few months, allowing students, academics, and everyone else to borrow up to five digitized books or ebooks for a two-week period. As opposed to how the Controlled Digital Lending system usually works, during this emergency period, the Internet Archive allowed people to access the same digital copy of a text at the same time.

Some authors and publishers, regardless of the benevolent act at a time of a national emergency, believe that the Controlled Digital Lending theory fundamentally misinterpreted copyright law. As the Authors Guild stated, “There is simply no basis in the law for scanning and making copies of entire books available to the public.”

This dispute has played out for years: In 2019, the British Society of Authors threatened to sue the Internet Archive unless it stopped the alleged unauthorized lending of digitized books. The launching of the National Emergency Library at a time when most libraries were closed frustrated many authors, who worried their income could be further endangered at a time of particular precarity.

The Internet Archive maintains that its work does not actually harm writers or publishers.

“In a copyright lawsuit against a practice that has continued for years, one would expect the copyright holder to be able to point to some metric showing that the defendant’s conduct has harmed them,” the recent motion seeking summary judgment, presented in early July, reads. “Plaintiffs have failed to quantify any market harm from CDL. And there’s a good reason: because the lending, licensing, and sales data demonstrate that no such harm has occurred or is likely to occur.”

Still, the plaintiffs are asking for the Internet Archive to repay financial damages for 127 copyrighted titles present in the Open Libraries: according to an estimate by Vox, if the publishers win they could receive up to $19 million dollars in damages—equivalent to one year of the Archive’s operating revenue.

According to the EFF’s McSherry, the stakes far surpass the Internet Archive. “The publishers are not seeking protection from harm to their existing rights. They are seeking a new right foreign to American copyright law: the right to control how libraries may lend the books they own,” he stated.

“Beyond the monetary damages, the publishers are asking for the destruction of 1.4 million books, many of which do not exist in digital form anywhere else. That would be a real tragedy for people who depend on us for access to information,” Internet Archive founder Brewster Kahle told Vox in 2020.

Neither the Internet Archive nor the plaintiff’s attorneys replied to The Daily Dot’s request for comment.

Now, as the summary judgment process plays out, many users are showing their support for the Internet Archive, highlighting the revelatory work the non-profit organization has been doing since it started in 1996.

Its biggest feat by far is the maintenance of the Wayback Machine, an invaluable collection of over 390 billion web pages that represents the most thorough archive of internet history and culture in the world.

Most of the posts stress the Internet Archive’s importance in their pursuit of knowledge and information.

“The data loss if the Internet Archive went down would be comparable to the Library of Alexandria,” one user said.

“I have access to a major university library, and all its databases. The Internet Archive library is a better tool than most discovery systems. It can search *inside* ALL its books. This helps me find useful sources at my libraries, at other libraries, and books to PURCHASE,” another wrote.

The Archive’s importance for academic research was also stressed in a tweet stating that: “Without Internet Archive, much of my research would not be possible. Most of what I access are out-of-print books from the nineteenth century.”

Considering that the print copies of these books are usually incredibly hard to access, let alone borrow, having a free, digitized copy at a click’s distance can speed up the research process significantly—and make knowledge more attainable for people who don’t work in academia.

The Mosul Eye, a news blog that documented the Islamic State’s occupation of the Iraqi city of Mosul, said that “In many cities like Mosul, where our libraries have been destroyed by terrorism, websites like the Internet Archive have become our only window to knowledge”.

Some are also underlining how the whole lawsuit can be interpreted as a dispute on the nature of libraries itself, since the plaintiffs are essentially going after the Controlled Digital Lending system as an alternative to the more conventional approach to buying ebooks that brick-and-mortar libraries mostly employ.

“This isn’t authors vs piracy. It’s about the possibility of forging a pathway, in our existing, awful, law, for libraries to function like they’re supposed to. Every copy of every book a library owns could be checked out as an ebook. Want a rare book? If any library has a copy, they can loan your library theirs instantly through interlibrary loan. The Internet Archive has already digitized it, and all the other library has to do is set their copy aside,” @cozyunoist wrote.

With the parties’ request to proceed with summary judgment being granted, a ruling is expected sometime toward the end of 2022 and beginning of 2023.