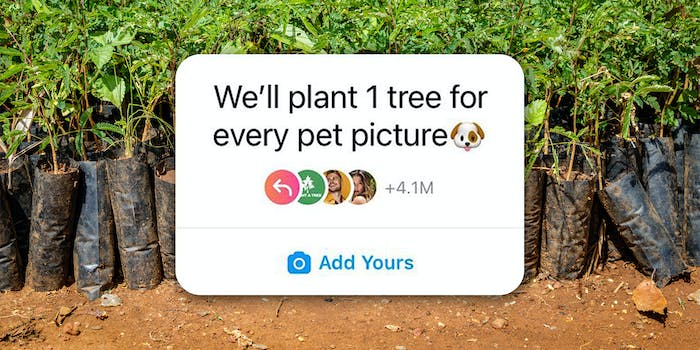 The account behind it has been accused of scamming for years.

It seemed like a cute way to show off your pet and help the environment. A recent Instagram sticker campaign promised a tree would be planted for each pet picture Instagram users posted. Unsurprisingly, the sticker rapidly went viral. To date, more than 4 million people have shared it.

But what was supposed to be an altruistic campaign to contribute to trees being planted simply by sharing pet pics belies something more sinister. The account that created the sticker has a lengthy history of being accused of running Instagram scams.

As the trees for pet pics sticker spread far and wide over the weekend, people wondered who created it, as it didn’t link to or credit an account.

On Monday, the mystery was solved when Plant a Tree Co. claimed credit. On Instagram, where it has 1 million followers, it wrote a lighthearted post claiming that what was supposed to be “a fun tree planting campaign where we can show off our awesome pets” quickly got out of hand.

“We immediately realized the post would grow too big and that we didn’t have the resources to plant that many trees, so we deleted it 10 minutes later,” Plant a Tree Co. wrote.

Even after it deleted the post, it said, the sticker continued spreading. It also said its credit for creating the sticker was removed due to an Instagram “bug.”

But, because it really does want to plant all those trees, Plant a Tree Co. said it was launching a fundraiser to benefit the nonprofit Trees for the Future. It noted that it’s not affiliated with the nonprofit, which trains farmers in sub-Saharan Africa to create sustainable agroforestry systems called forest gardens.

The post urged people to share it and tag friends, celebrities, and Instagram “so they can see this and so we can ACTUALLY plant 4 million trees.”

This all sounds like a harmless mistake. Plant a Tree Co. wouldn’t be the first social media user to try to make a positive impact and have it spread far further than anticipated.

Dig beneath the surface and the plot thickens, however.

Trees for the Future, the supposed beneficiary of the fundraiser, says it has nothing to do with Plant a Tree Co. or the fundraiser.

“Trees for the Future is not affiliated with Plant a Tree Co.,” a spokesperson told the Daily Dot via email. “When the fundraiser came to our attention, we immediately reached out to the group asking them to clarify the nature of the fundraiser and we reported the post to Instagram.”

They added that Trees for the Future has planted nearly a quarter-billion trees to date and its goal is to plant 1 billion trees by 2030. “We’re happy to report that we are on track to meet that goal.”

(It also bears mention that Plant a Tree Co.’s Instagram post for the so-called fundraiser doesn’t include a link to donate funds.)

Plant a Tree Co. responded to the Daily Dot’s inquiries, but did not provide any information outside what was included in its Instagram post explaining what had happened.

This isn’t the first time Plant a Tree Co. has been the subject of controversy. It’s been accused of being a “scam” or “faketivist” operation for years.

Exposing Instagram Scams first posted about the account in 2019, writing, “@plantatreeco is fake!” As proof, it pointed out that the account was unverified, new, offered no information about its partners or finances, and said its website “was thrown together within minutes and they are selling merchandise.”

“The picture of a tree is a random stock photo you can find by searching tree on Google,” it added.

“PLANTATREECO WILL SCAM NO MORE!!!!!” it wrote.

Instagram didn’t respond to the Daily Dot’s request to confirm the suspension and question about what guidelines were violated. The suspension didn’t last, however, much to Exposing Instagram Scams’ chagrin.

Two months ago, in what appears to be its coup de grâce, Exposing Instagram Scams posted a compilation of information about Plant a Tree Co. It accused the account of “lying” about being affiliated with a legitimate organization and not living up to its promises to plant trees.

Plant a Tree Co.’s website claims to have planted 6,500 trees towards its goal of 1 million trees. According to Exposing Instagram Scams, that’s not true. It says the company has been making the same claim for three years. An internet archive of the website shows that Plant a Tree Co. has been claiming to have planted 6,500 trees for at least a year.

“After having exposed them multiple times, the owner of the account started digging for info on all sorts of accounts trying to disprove their statements, myself included,” it wrote. It said Plant a Tree Co. threatened to sue, then blocked “everyone who tried to expose them.”

Via Instagram direct message, Exposing Instagram Scams told the Daily Dot they believe that Plant a Tree Co. “bit off more than they could chew. [Ten]-50,000 people falling for their trick is manageable—but 4 million+ will lead to some people batting an eye—and that’s why they’re saying it was a mistake.

“They constantly take advantage of Instagram features to grow their online store and Instagram account via tricking people into thinking they’re donating/making a difference but since it doesn’t really happen, it ends up doing more harm than good,” Exposing Instagram Scams added.

Like the pet photo sticker campaign, Plant a Tree Co.’s early posts vowed to plant trees based on engagement. Its core business, however, is selling necklaces—well, sort of. “In order to achieve our goal of planting 1 million trees, we sell necklaces. Each necklace funds the planting of one tree,” its website says.

But the necklaces, which it claims are valued at $29.95, are each on “sale” for zero dollars. That’s right, they’re free—plus shipping. The Daily Dot put in address information for locations on opposite coasts of the United States and each time shipping for the delicate lead-tin-alloy necklaces was calculated at $8.95.

“It does not cost 8 dollars to ship something with virtually no production costs via TWO MONTH snail mail,” it wrote two months ago. It claims that Plant a Tree Co., whose necklace brand shares the name of an apparently unaffiliated jeweler in California, makes $6 profit per necklace, $1 of which it’s supposed to donate to planting trees or other various causes.

The Daily Dot found Google records in which the company promised to donate $1 for each necklace purchased to a nonprofit dedicated to elephants and one to combat hate crimes against Asians.

Fake Website Buster, which says Plant a Tree Co. is a “fake,” says it’s claimed to raise funds for other environmental and social causes, including Australian bushfires and Black Lives Matter.

Social media is a powerful tool to raise awareness and funds for worthwhile causes. It’s an equally powerful means of taking advantage of people’s desire to make a positive impact simply by sharing a cute picture of their pets.

This post has been updated to note that Plant a Tree Co. responded to the Daily Dot.