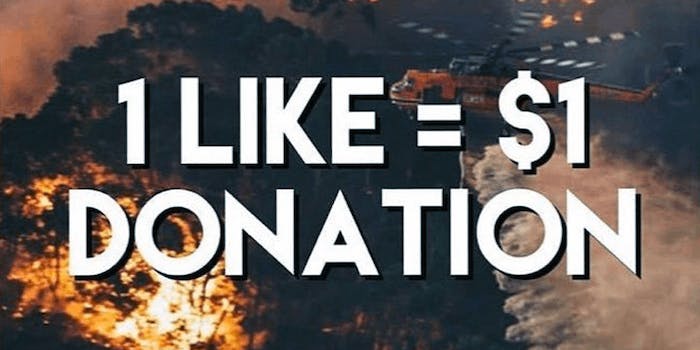 Liking a post won't get $1 donated to Australia for you.

Scammers on Instagram are taking advantage of the devastating bushfires in Australia in an effort to earn likes, follows, and money.

Some are fabricating connections to actual aid organizations, all the while sending users to their personal PayPal accounts.

Two such Instagram accounts, which were reported on by HuffPost and have since been suspended, received a combined 1 million likes by pledging to donate funds to National Geographic. Neither account had any connection to the organization.

Another scam involves building up a page’s follower count before attempting to sell the page or acquire paid brand deals.

An account, known as @trees4australia, according to HuffPost, “quietly switched its page to private-access only, deleted its posts and pivoted to an unrelated username” after racking up 23,000 followers.

In August of 2019, the exact same scams were seen when large swaths of the Amazon rainforest were ablaze. An account called @PrayForTheAmazonia was able to rack up 90,000 followers and promote its GoFundMe before eventually being removed.

The crisis in Australia has been ongoing since September and shows no signs of stopping anytime soon. More than a billion animals are feared dead, while 27 people have lost their lives. In total, an estimated 32,400 square miles have burned thus far.