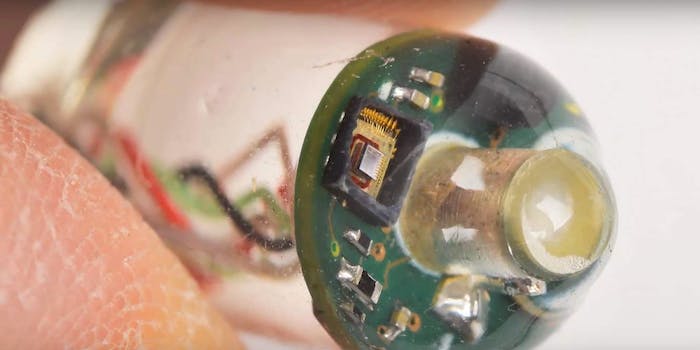 This health tracker isn’t a wearable—it’s a swallowable

It's easier than swallowing your Fitbit.

Stethoscopes have been used for nearly 200 years; now scientists are utilizing the centuries old technology to create an ingestible health tracker the size of an almond.

Researchers from Massachusetts Institute of Technology have developed a swallowable sensor that can measure vital health signs from inside the body—the details of which are explained in a paper recently published to the journal PLOS ONE.

“We listen to the ‘lub dub’ of the heart, and the  ‘shishing’ sound of the lungs, to record each heart beat and breath,” Albert Swiston, Ph.D., a biomaterials scientist working at the MIT Lincoln Laboratory, told the Daily Dot.

Most doctors currently measure vital signs using techniques that require contact with the patient’s skin. The ingestible pill manages to accurately record the same information without the need for touch—and does so with a single sensor.

“We can then use a signal processing method to pull out heart and respiratory rates, which are then given to a radio on the pill and can be sent out of the body to a receiver,” like a smartphone or computer, Swiston explained.

Inspiration for the digestible health tracker came from existing devices that can be swallowed to take a person’s core body temperature or snap images of the digestive tract. Swiston and his fellow researchers built upon this idea by housing a tiny microphone, along with a battery and thermometer, inside the pill casing.

After testing the pill on pigs, researchers found the device capable of accurately discerning heart rate and respiratory rate even in varied conditions like when food is being digested. The smart capsule houses itself inside the gastrointestinal tract to get its readings, but remains for only a day or two. Beyond that, a person would have to pop another pill to get additional readings.

While the short lifespan of the ingestible sensor seems like a considerable disadvantage to the continuous tracking capabilities of a wearable device, Swiston said that in some cases, his pill is much better suited for use because it can collect certain types of data that no wearable system can.

“If you want these types of data, such as looking for a fever due to hospital-based infections after an operation, then you need to consider our system,” he said. “We’ve invented a[n] in-the-body sensor that is not surgically implantable—the advantages in that distinction can be enormous if you want better data, but not necessarily have a device put in you forever.”

Swiston pointed specifically to body core temperature as a reading wearables are incapable of getting because it can only be measured rectally or via ingestible systems. “I would always prefer the latter,” Swiston said.

While the development of the ingestible tracker is still ongoing, the potential uses for the device are vast. “I think the military and performance sports market would benefit, before games, races, [and] matches,” Swiston said. He also suggested possible clinical cases the pill could be used for, such trauma or burn patients who’s skin can’t be touched, or in a busy emergency room setting.