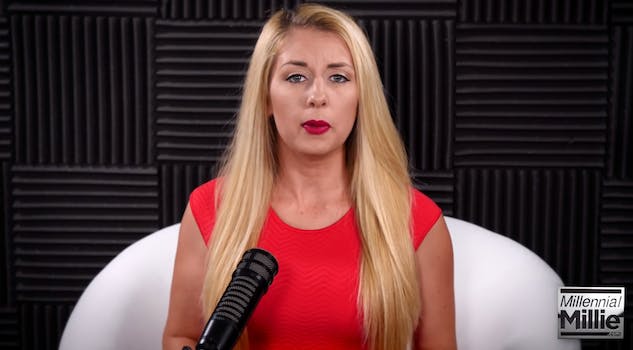 No, InfoWars’ Millie Weaver was not arrested for ‘exposing’ the ‘deep state’

The Daily Dot has learned she was arrested for alleged robbery and domestic violence.

InfoWars reporter Millicent “Millie” Weaver was arrested on Friday, and, despite conspiracy theories that claim she was arrested for “exposing” an alleged “deep state,” she has been charged with legitimate alleged crimes.

When speaking to the Daily Dot via phone Saturday morning, a Portage County Jail administrator said that Weaver is being charged with alleged “robbery, tampering with evidence, obstruction justice, and domestic violence.”

When asked about the claim that Weaver was arrested for exposing the deep state, the administrator laughed. Conspiracy theorists believe a type of shadow government exists and is working to undermine President Donald Trump and his agenda.

The InfoWars reporter on Friday filmed and posted a video of her own arrest. The arresting police officer did not place her in handcuffs.

“Guys, I don’t know what’s happening right now. The police have just showed up at my house, and they said that they are arresting me,” Weaver says in the video.

She then insinuates that she is being arrested because she was about to reveal “huge breaking news.”

“Guys, I’m literally about to break huge breaking news right now, and I’m being arrested and I have no idea why,” she says.

She was taken into custody in front of her children.

Weaver was unable to be reached for comment by the Daily Dot.

Following Weaver’s plea for fans to share her video, conspiracy theories were spawned on Twitter as to why she was arrested.

“Why was Millie Weaver ARRESTED?!! This is outrageous, and it’s funny how this happened right after she exposes the deep dark secrets of the government in her movie #ShadowGate,” Twitter user @EdenAnae declared. “There are some wicked people in high places who don’t want this to get out…Pray for Mille.”

Weaver is slated to appear before Judge Rebecca Doherty on Monday morning.

UPDATE 11:48am CT, Aug. 17: Court documents obtained by Right Wing Watch indicate Weaver had a dispute with her mother, who is cited as the victim. The prosecutor assigned to the case recommends that Weaver’s bail be set at $20,000.