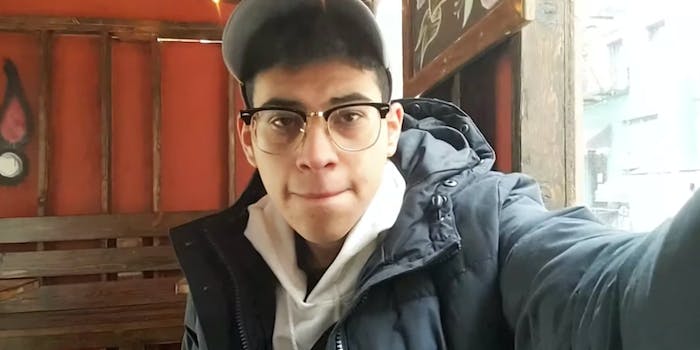 In the stream, he walks toward two women eating while telling viewers he's going to 'enhance their meal.'

A 19-year-old self-proclaimed incel was charged by federal agents for making a bomb threat toward two women sitting at a restaurant in Manhattan.

Malik Sanchez, who goes by “Smooth Sanchez” online, was reportedly charged with one count of false information and hoaxes after the incident, which he live-streamed. He was arrested in Manhattan on Wednesday, according to a press release from the Southern District of New York.

Sanchez, who self-identifies as an “involuntary celibate” or “incel,” uploaded the YouTube live stream in question back in February. The alleged video is currently still online.

In the video, Sanchez walks inside an enclosed restaurant space toward two women eating while telling viewers he’s going to “enhance their meal.” Then, Sanchez proceeds with a racist attempt at scaring the two women.

Sanchez has over 7,000 subscribers on YouTube, where he live streams frequently from the streets of New York City, bothering strangers and performing unhinged “pranks” for views, as he’s said before.

The video shows the two women become visibly uncomfortable, pull up their masks, and eventually leave the space along with others nearby who actually ran off.

This isn’t the first time Sanchez’s stunts have gotten him in trouble. Other incidents, cited in a criminal complaint, include arrests for allegedly climbing Queensboro Bridge and allegedly spraying mace at several people.

A New York judge ordered him held without bail, pending his trial in Manhattan federal court.

“In this case, Sanchez’s alleged behavior carries the potential for a federal prison sentence,” FBI Assistant Director William Sweeney said in a statement. “Anyone who intends to carry out a similar hoax should know that the FBI’s JTTF [Joint Terrorism Task Force] is ready and willing to respond.”