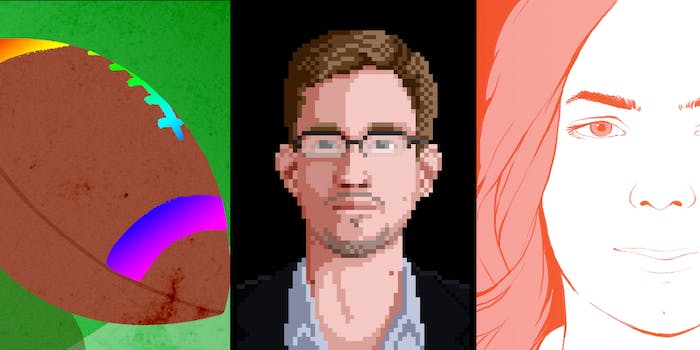 Important news you may have missed on Wednesday, Sept. 14.

Speaking live from Moscow, Edward Snowden and his advocates on Wednesday laid out his case for a presidential pardon. “Today, whistleblowing is democracy’s safeguard of last resort,” he said. “It’s the one on which we rely when all the checks and safeguards have failed and the public has no idea what’s going on behind closed doors.”

A cloud storage company called SpiderOak, which was endorsed by Snowden in 2014 as a secure alternative to Dropbox, has rolled out a Slack-live program for collaboration that also keeps hackers at bay.

Colin Powell’s hacked emails are a joy to read: He criticizes both Hillary Clinton and Donald Trump, the latter of which he believes is running a “racist” campaign. As for Clinton, Powell said she could’ve gotten past the scandal two years ago “by merely telling everyone honestly what she had done.” In other emails published by hackers, Powell had some nasty things to say about former President Bill Clinton, including a remark about how he likes “dicking bimbos.”

The Atlantic Coast Conference announced on Wednesday that it was following the lead of the NBA All-Star Game and the NCAA, moving all North Carolina-based championship games out of the state. The three major sports bodies are pulling the events as part of a sweeping boycott of the state’s controversial anti-LGBT law, HB2.

After a five-day hunger strike, the U.S. military has agreed to allow Chelsea Manning to undergo gender reassignment surgery. If completed, she will be the first transgender prisoner in the country to receive the treatment. Manning, who is currently serving the remainder of a 35-year prison sentence, attempted suicide two months ago and later cited a lack of medical care as the cause.

A teenage hacker discovered a way to get free data on his phone. —via Jordan Pearson, Motherboard

Donald Trump has refused to release his tax returns, so Vice News is suing the IRS to have all audits of his tax returns released through FOIA. —via Jason Leopold, Vice News

Leaked court documents from a ‘John Doe investigation’ in Wisconsin offer an unprecedented view of the influence of cash on politics. —via Ed Pilkington, Guardian