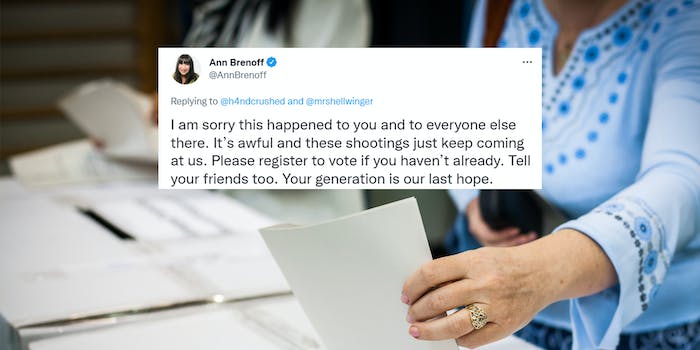 It's the strangest take.

On Monday, bullets ripped through a 4th of July parade in Highland Park, Illinois. Six were killed and dozens injured in the mass shooting. One of the victims tweeted a photo of her face bloodied from where a bullet grazed it.

Thousands reacted to the tweet by sharing condolences and sympathy. A retired HuffPost editor took a somewhat different approach by telling her to vote. The suggestion triggered an avalanche of criticisms. People felt it was flippant, insensitive, or even a form of victim-blaming.

On Monday, Twitter user lilli (@h4ndcrushed) shared a graphic photo of the injury to her face.

“I can’t fucking believe I was in the middle of a mass shooting. I’ve felt safe at this parade for 18 years and today I got hit with a bullet and nothing will change in America. This is ridiculous,” lilli wrote.

Ann Brenoff, formerly of HuffPost, replied, “I am sorry this happened to you and to everyone else there. It’s awful and these shootings just keep coming at us.”

“Please register to vote if you haven’t already. Tell your friends too. Your generation is our last hope.”

Although Brenoff did include condolences, most focused exclusively on the second part of her tweet. Criticisms poured in.

Many felt that Brenoff had essentially suggested that people can avoid trauma like mass shootings by participating in the democratic process.

Others piled on with jokes and cartoons.

“Hey bud! Yeah I’ve been shot. Forget that though, check THIS out: Pokémon Go To The Polls,” @Ettin64 said.

Some took the view that it’s unfair to task young people with fixing the problems they’re inheriting.

“Perhaps we should simply not responsibilize The Youth for a world we helped build and sustain,” commented @PatBlanchfield.

Many reactions were pithy, such as a thumbs-down symbol or a “shut the fuck up” gif.

Several of the commenters suggested that Brenoff telling a young mass shooting victim to vote to fix the country is what’s wrong with liberalism.

“Oh, a kid got shot in the face? Let me browbeat them for my own political purposes real quick,” @Chinchillazllla replied mockingly.

Others pointed out that Illinois is a heavily Democratic state and Highland Park itself has a Democratic mayor.

“They’re already doing as much as they can in terms of voting,” @pervocracy replied.

A handful of people defended Brenoff, even if they felt she could’ve chosen a better moment.

“I mean… It’s insensitive but she’s right,” said one.

The overwhelming consensus is that Brenoff should’ve kept that tweet in the drafts.

“A lot of people are in your mentions right now telling you that this is an awful tweet and I’m here to tell you that they’re right,” said one.