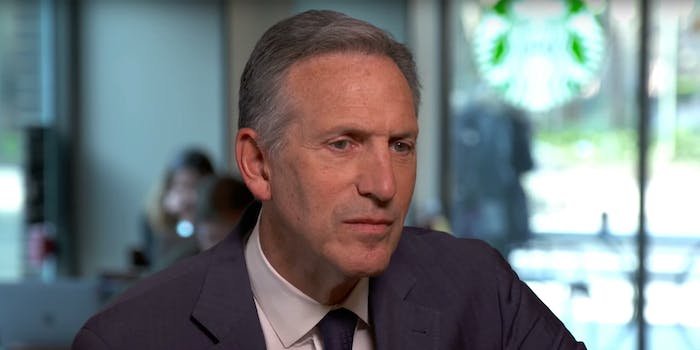 Donald Trump’s ascendency to the presidency has had many terrible consequences. One of the most annoying is that every rich person now thinks that they too could do it. The latest billionaire to fall under the belief that he can fix America is Howard Schultz. Schultz has been an undeniable success in business. As the founder and CEO of Starbucks, he has brought an approximation of the urban coffee shop to suburbs and truck stops across America, and he has made a lot of money along the way. But is a Howard Schultz 2020 campaign a real possibility?

It sure sounds like it. Over a series of interviews and tweets this week, Schultz made clear that he believes the 2020 election needs a centrist billionaire named Howard Schultz.

Here’s what we know so far about the Starbucks chairman’s rumored foray into politics.

Who is Howard Schultz?

Schultz’s run seems quixotic from the outset, but that likely won’t stop the former Starbucks executive. He has earned credit as a savvy businessman and a fairly progressive CEO, offering relatively high wages and programs like tuition assistance to workers. Most recently, Starbucks organized a company-wide “racial bias training” after the arrest of two Black men at a Starbucks in Philadelphia. However, Schultz hasn’t looked nearly as competent in his other endeavors. Outside of the coffee business has been a comedy of errors, defined by appearing relentlessly out of touch.

In 2001, Schultz bought the Seattle SuperSonics. The team, fondly remembered for their strong ’90s lineup featuring Sean Kemp and Gay Payton, was driven into the ground under Schultz. Schultz botched a series of personnel and PR almost immediately, trading Gary Payton and coming up with schemes like playing jazz music in the stands. Frank Hughes of ESPN wrote of Schultz after the sale of the team:

He had become angry, bitter and maddeningly defiant, like a petulant child who decided to take his toy and go home. Only, in this case, he quite obviously threw his toy down a drainage ditch and stalked home while boldly misrepresenting the truth, telling everybody they could still play with the toy.

Schultz alienated the city by demanding public stadium subsidies in exchange for keeping the team in town. So he went down not only as a failure but as a bully. After only a half-decade of ownership, the team was sold to Oklahoma City and became the Thunder.

You can see this character trait in Schultz’s tenure at Starbucks as well. Schultz consistently managed coffee better than people. While the company pays higher than average wages, Starbucks is a member of the The National Restaurant Association, a group that lobbies against movements like Fight for 15. The company has a history of union busting. The company has even been resistant to pushes for things like consistent scheduling and many employees do not make a living wage.

Schultz has been happy to provide benefits to employees that you don’t see elsewhere, but only on his terms.

Building a successful business is difficult, but those skills don’t necessarily translate to other areas. Some have compared Schultz’s reign at Starbucks to that of a benevolent dictator. While he may be a ruthless expert when it comes to selling lattes, Schultz has a much less impressive record when he has to deal with people and not coffee products.

Unfortunately for Schultz, being a politician is a lot more like running a basketball team or dealing with disgruntled employees than it is like selling a mocha frappuccino.

What are Howard Schultz’s political beliefs?

In the tradition of Steve Forbes and Michael Bloomberg, like most of the one percent, Schultz’s politics are unappealing to any segment other than rich people. He is interested in an even more conservative version of the pragmatic centrism that lost Hillary Clinton the election.

Schultz told CNBC, “It concerns me that so many voices within the Democratic Party are going so far to the left. I say to myself, ‘How are we going to pay for these things?,’ in terms of things like single payer [and] people espousing that fact that the government is going to give everyone a job. I don’t think that’s realistic.”

He went on to add that the country’s greatest threat is the national $21 trillion debt. “The only way we’re going to get out of that is we’ve got to grow the economy,” Schultz told CNBC. “And then we have to go after entitlements.”

Amazingly, in touting his potential run in January 2019, Schultz said he wouldn’t engage in hypotheticals about what he would do as president.

Which is what campaigning is.

Will Howard Schultz run for president in 2020?