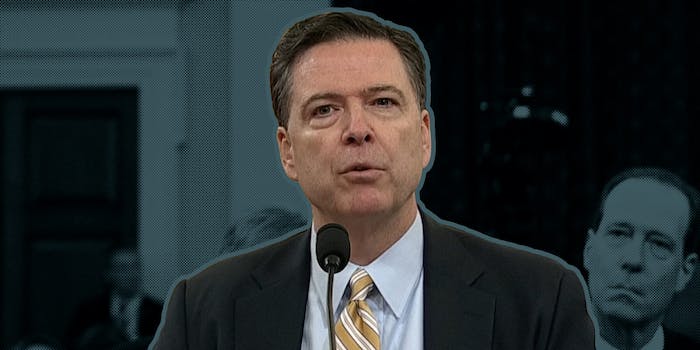 Comey testimony: How to watch and what to expect

Here's everything you need to know about the fired former FBI director's big testimony.

The firing came amid the FBI’s ongoing investigation into whether Russia played any role in interfering with the 2016 presidential election, including potential collusion between the Trump campaign and Moscow. Trump’s decision to fire Comey sparked widespread criticism and accusations of obstruction of justice.

Comey is scheduled to testify at 10am ET on Thursday. A non-televised closed session with congressional leaders is expected to start at 1pm ET.

A large number of topics are expected to be touched upon. Following Comey’s firing, a flurry of stories came out about the former FBI Director’s relationship with Trump and including:

All of those incidents could be fair game for questioning during the testimony.

What can we expect to hear from Comey?

While Senate Intelligence Committee Chairman Richard Burr (R-N.C.) says “anything that would be off-limits would have to be expressed” by Comey, it remains unclear what specifically Comey can say, as there is still an ongoing investigation in regards to Russia.

An ABC News report on Tuesday said he will not accuse Trump of obstruction of justice.

“He is not going to Congress to make accusations about the President’s intent, instead he’s there to share his concerns,” a source told ABC News. Comey is expected to tell the committee “what made him uneasy” about Trump’s requests, the news outlet reported.

Comey is also expected to dispute Trump’s claim that he told him three separate times he was not under investigation, ABC News reported.

As for Trump, there has been speculation that he may livetweet during the testimony “if he feels the need to respond.” The president has also scheduled a speech for 12:30pm ET, which would likely fall during Comey’s testimony.

How do I watch the Comey hearing?

Watching the testimony should be quite easy. You can also follow along as the Daily Dot livetweets the developments.

Most of the major networks have announced they will have live coverage of the testimony. Several networks are live streaming the testimony online as well, including CSPAN.