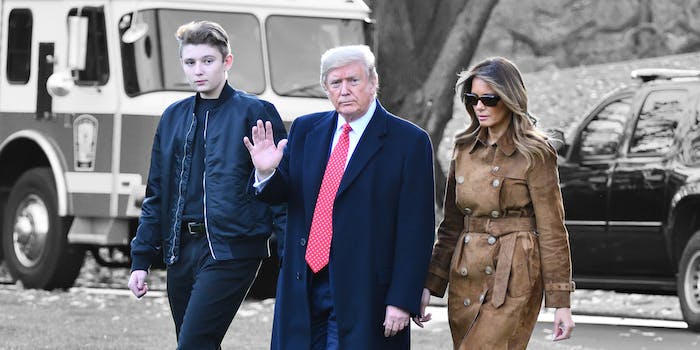 Barron Trump is taller than the internet can handle

A new picture raises new questions about the tallest Trump.

How tall is Barron Trump? Given that he’s a still growing teenager, one who isn’t often spotted in public, it can be hard to precisely pin down. He’s a growing boy, after all.

But a new picture of Barron, with his mother Melania in New York City, gives us a loose estimate.

How Tall is Barron Trump?

Given that his mother is 5-foot-11 and he’s towering over her, the current best estimate of Barron Trump’s height is that he’s 6-foot-7. Tall as hell is the answer to your question.

And given that he’s only 15, an age where a child should be something like 5-foot-8, the sight of a tall child delighted and stupefied the internet.

The Trumps kept Barron almost entirely out of the spotlight during their time in the White House, so each new time he appears, it seems to the internet that he literally levels up.

This was Barron Trump next to Melania just five years ago, at Trump’s victory speech in 2016.

Given though, that Barron Trump is a child, even noticing that he’s of a certain height (the tall kind), people became irrationally apoplectic that you mention it.

“Barron Trump should be off-limits,” they shout.

You’re damn right he’s off-limits. No one on Twitter is tall enough to touch that boy.