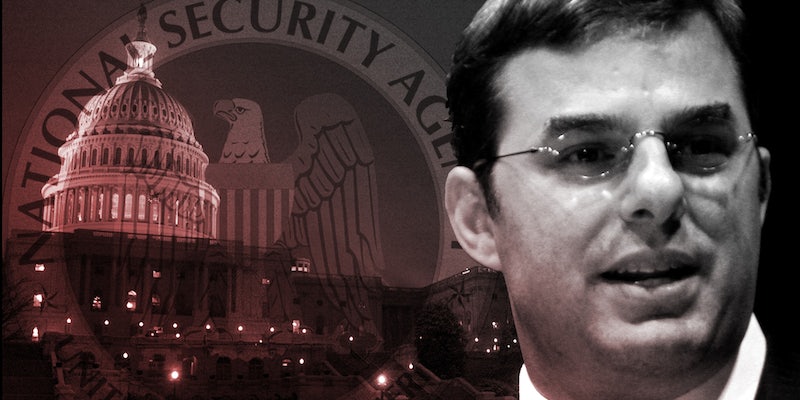 Rep. Justin Amash's amendment would have blocked the NSA from collecting metadata on Americans not under criminal investigation.

The House has rejected an amendment to stop the National Security Agency from tracking the telephone data of seemingly every American.

Many privacy activists considered it the best immediate chance to address what they consider vast overreach by the NSA.

Introduced by Justin Amash (R-Mich.), the proposed amendment was tacked onto the 2014 defense appropriations bill. It was written specifically to defund the NSA’s program, authorized by the Patriot Act, of tracking the metadata—including call times, locations, and durations—of any American, not merely those under criminal investigation.

Leaked documents show that the NSA began tracking domestic metadata in the immediate aftermath of 9/11. However, the process wasn’t made explicit to the public until whistleblower Edward Snowden released a secret court order showing that Verizon had been legally compelled to give the NSA a record of every call made or received on American soil for a three month period. Further leaks showed that all major telecommunications companies regularly receive similar orders, and the Director of National Intelligence revealed Friday that they had been renewed for another quarter.

Activists rushed to support Amash’s amendment, which was only approved for a full House vote on Monday. The website Defund the NSA invited Americans to call their Congressional representatives to back it. At the same time, the U.S. intelligence committee, as well as the White House, embarked on an emergency campaign of their own to convince the House that metadata collection is vital to American security.

It was a heated debate.

Mike Rogers (R-Mich.), who has consistently painted the program leading opposition, claimed that “passing this amendment takes us back to September 10th.”

In an apparent dig the flash activist movement in support of Amash’s amendment, Rogers echoed an earlier gaffe when he claimed that opponents of his notorious Cyber Intelligence Sharing and Protection Act (CISPA) as a “14-year-old tweeter in the basement.”

“Are we so small that we can only look at our Facebook likes in this chamber?” he asked the House.

Jeff Duncan (R-S.C.) simply read the text of 4th amendment, which holds that Americans are exempt from “unreasonable searches and seizures” without a warrant.