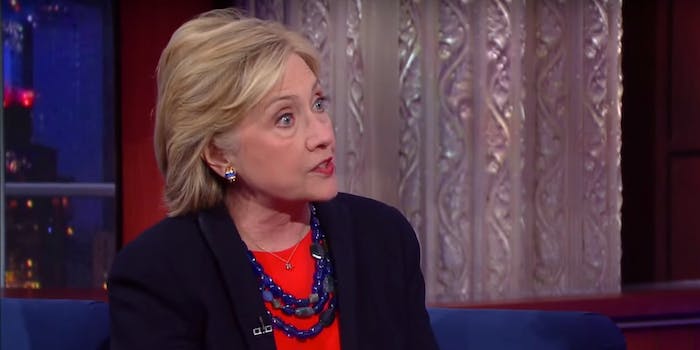 Hillary Clinton laid out an ambitious agenda for her first term in an interview with Stephen Colbert, discussing what she’d do if the big banks fail again like they did in 2008 and why she even wants to be president at this point.

The question tripped up Ted Kennedy in 1979, but Clinton was fully prepared. She said wanted to build on the progress America had made over the past few years and help people (particularly younger people) live up to their potential. But, as she assured the Late Show host, she wasn’t running for her husband Bill Clinton’s or President Barack Obama’s third term.

Clinton also gave some of her most straightforward responses on the economy to date, saying that if the big banks were at risk of failing again, she’d let them.

“Yes, yes, yes, yes, yes, yes, yes,” Clinton said. “First of all, under [the] Dodd-Frank [Wall Street reform law], that is what will happen, because we now have stress tests, and I’m going to impose a risk fee on the big banks if they engage in risky behavior.”