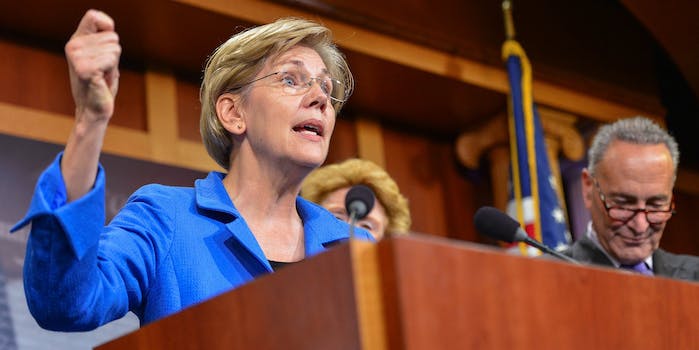 The short list of potential running mates is revealed.

The search for a running mate for presumptive Democratic nominee Hillary Clinton has intensified, according to the Associated Press. Aides have reportedly contacted a pool of potential candidates for vetting before Clinton makes her final decision in a few weeks.

According to CNN, the list of serious contenders is believed to be no more than five names long; however, aides say Clinton has imposed top secrecy of the process so they are not sure of the exact number.

While interviews have not yet been conducted, extensive background checks are being performed on a list that includes Massachusetts Sen. Elizabeth Warren, an Internet favorite who is known for her going after both Wall Street banks and presumptive Republican nominee Donald Trump. Virginia Sen. Tim Kaine and Housing and Urban Development Secretary Julian Castro of Texas are also reportedly on Clinton’s VP shortlist.

These three are not the absolute finalists, several Democrats told CNN. Other contenders may include Labor Secretary Tom Perez, Sen. Sherrod Brown of Ohio, and Rep. Xavier Beccera of California.

Clinton’s aides say that Vermont Sen. Bernie Sanders (I)—who remains in the running for the Democratic nomination against Clinton—was not on the list of possible candidates.

Many began rooting for Clinton to choose Warren as her running mate because she may help Clinton appeal to progressive and Sanders’s supporters. New reports, however, show that Democratic Wall Street donors are warning Clinton not to choose Warren because it could drive away Clinton’s Wall Street base.

Should Clinton choose Warren, it would create the first all-female presidential ticket for a major party.

Kaine, a Virginia native who was previously vetted by President Barack Obama for the VP pick, is a former Virginia governor who previously headed the Democratic National Committee. Some say he may be a good pick because he appeals to independents and swing voters, the Washington Post reports.

Castro has been marked as a ‘rising star’ in the Democratic Party. He served as the mayor of San Antonio, Texas, from 2009 to 2014, before becoming the Secretary of Housing and Urban Development in July 2014. While Castro isn’t known for his ideological controversies, his name on the ballot would help to balance the Democratic ticket and potentially give Clinton an edge in Texas, a state some pollsters believe she could win.

According to CBS News, Clinton has so far been vague in describing potential VP picks.

“I’m looking broadly and widely and I’m gonna begin to really, you know, dive into thinking hard about this,” she said earlier this month. “I’m gonna be looking, first and foremost, as to who I believe could fulfill the responsibilities of being president and commander in chief.”

The Clinton campaign did not respond to our request for comment