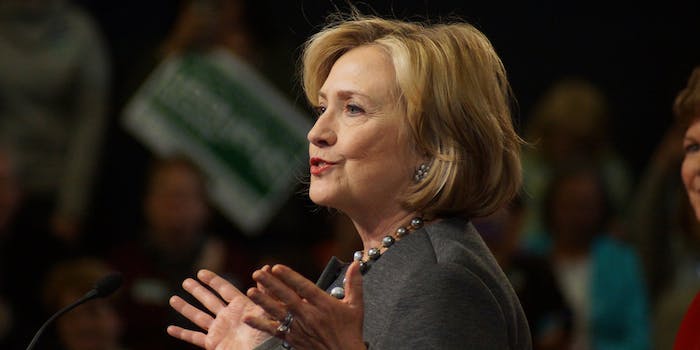 Hillary Clinton ran her own server for her email account

A private server comes with its advantages.

The story of former Secretary of State Hillary Clinton’s private email account continues to unravel. The Associated Press reported on Wednesday that Clinton’s account—which was not subject to federal archiving procedures or public records requests—was hosted on a private server based at the Clintons’ Chappaqua, N.Y., home.

Operating a private server offered Clinton many advantages that she wouldn’t have had if she had used Yahoo, Gmail, or another public service. For one thing, because a subpoena would have to go to Secretary Clinton’s lawyers and not those of a company like Google, her team would have been in a better position to object to such a legal demand. In addition to more direct legal protection, her in-home server would have had the best physical protection available—the U.S. Secret Service, which protected the house.

Clinton’s spokespeople have not yet addressed the AP story. But if the report is accurate, it would distinguish Clinton from other public officials who have used private email addresses during government service, including former Massachusetts governor Mitt Romney and former Alaska governor Sarah Palin.

The AP found that Clinton contracted someone named Eric Hoteham to manage the email server at her house, but very little information about Hoteham is publicly available. Hoteham also ran servers for other Clinton family domains:

The Hoteham personality also is associated with a separate email server, presidentclinton.com, and a non-functioning website, wjcoffice.com, all linked to the same residential Internet account as Mrs. Clinton’s email server. The former president’s full name is William Jefferson Clinton.

This and other reports on Clinton’s email habits follow a blockbuster New York Times report on Monday night about Obama’s former top diplomat refusing to set up a government email address. In so doing, Clinton frustrated repeated attempts by journalists to use public accountability laws to investigate her tenure at the State Department.