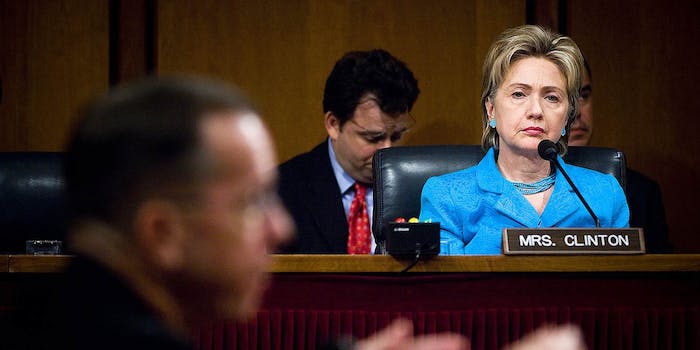 No one even comes close to her. Will that backfire?

We are currently 19 months out from the 2016 presidential election. This far from the election, polls don’t hold nearly the predictive power that they do close to decision day. However, the polls do show something relevant to the moment when Hillary Clinton finally dropped the word “presumptive” from her long-held frontrunner status.

The former First Lady, New York senator, and Secretary of State is staring with a commanding lead over everyone else even rumored to be thinking about a run for the Oval Office, according to the Real Clear Politics polling average.

Here is the margin by which Clinton is beating all of her theoretical rivals for the Democratic nomination.

Polls put Clinton in a significantly better position than she was in at the same time eight years ago, shortly before her primary campaign was felled by an young upstart named Barack Obama. According to surveys by the Pew Research Center, in June 2007, Clinton was beating Obama by 10 points. As of this February, her margin over her closest rival, Vice President Joe Biden, is a whopping 37 points.

It should be noted that the person doing the best against Clinton, populist Massachusetts senator Elizabeth Warren, has done pretty much everything she can to stress that she isn’t running. Democratic activists may want her as a progressive counterweight to the Clinton juggernaut, but that is likely just wishful thinking.

And while Biden hasn’t ruled out a run for his boss’s job, an analysis by National Journal indicates that Biden isn’t doing any of the sorts of things that a candidate would need to do in order make a serious run for the presidency.

For the other candidates who have made noise about mounting their own White House campaigns, the biggest hurdle is likely name recognition. Bernie Sanders, Martin O’Malley, and Jim Webb all come up short in surveys of of public awareness, making it difficult for them to gain support over someone who has been one of the highest-profile public figures in the world for the past two decades.

If any of those contenders do throw their hat into the ring, the name-recognition issue will likely ease somewhat as the media delves into the background and positions of the anti-Hillary candidate.

Without a serious competitor for the Democratic nomination, Clinton can immediately begin what is effectively a general-election campaign, without the traditional urgency of having to appeal to the party’s liberal base that largely turns out in Democratic primaries.

It also means that her Republican opponents can start running against her as much as they are running against each other. For example, Sen. Rand Paul, who announced his candidacy earlier this month, released an anti- Clinton attack ad last week.

While the path to beating Clinton next November isn’t quite as treacherous for GOP contenders as it is for her fellow Democrats, it’s certainly an uphill climb. Here are the margins by which Real Clear Politics has her defeating leading Republican candidates:

While Clinton’s leads over her GOP opponents are sizable, none is insurmountable. Even relatively unknowns like Ben Carson, a retired neurosurgeon who has never held elected office, seem like they could theoretically—under the right circumstances—make up that difference. Ten points is a lot, but that was also the margin Clinton held over Obama in early 2008—and look how that race turned out.

An important takeaway here is that the Democrats seem to have placed all of their eggs into Clinton’s proverbial basket.

There may be no candidate in history whose background has been as thoroughly vetted at Clinton’s. Even so, the uncovering of a major scandal, either by one of her political opponents or a news media with a dearth of other Democratic candidates to cover, could conceivably tank her poll numbers. With few other realistic options in their stable, the Clinton inevitability could ultimately prove detrimental to Democrats’ hopes of holding onto the White House next November.