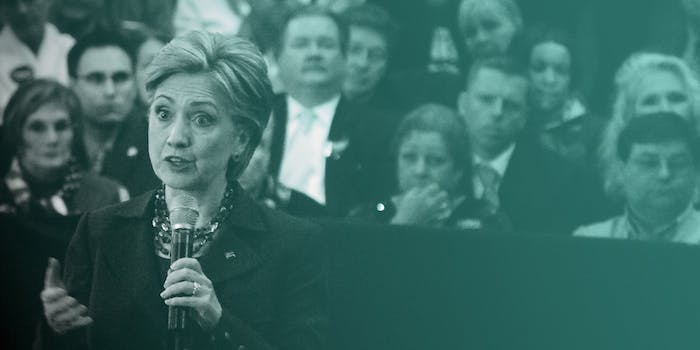 If you haven't seen something, don't say anything.

Hillary Clinton has clearly not watched Netflix‘s hit documentary series Making a Murderer, but that doesn’t mean she won’t answer questions about it.

Making a Murderer tells the story of Steven Avery, a poor, white Wisconsin man imprisoned for 18 years for attempted rape, then freed once DNA evidence cleared him of the crime. A few years later, he and his teenage nephew, Brendan Dassey, were arrested for a murder they say they did not commit.

During a town hall rally in Iowa earlier this week, reported the Daily Caller, an attendee asked the Democratic presidential frontrunner her thoughts on the true-crime documentary, which serves viewers a harsh look at the U.S. criminal justice system.

Here’s what the attendee asked Clinton, according to Gawker:

“Thank you for being here Madam Secretary, my question is over the holidays, a documentary came out called Making a Murderer. I don’t know if you are familiar with it, but it’s about a man and his nephew who are in prison for a murder even though there are serious questions about whether or not they were framed by local law enforcement. It raises a bigger question about our judicial system, where we seem to railroad poor people and uneducated people into prison, even when there are serious questions about their guilt or the denial of their constitutional rights. So I guess my question is what can we do to fix our broker judicial system in this country?”

Good question. Clinton has long made criminal justice reform a centerpiece of her campaign. The bad part is Clinton’s assumptions about who Steven Avery is. She answered:

“I think we do have a systemic problem in our criminal justice system. I believe we can get bipartisan support to address it. Because it is now very apparent we have a couple of big issues. One, it is true that there’s enough evidence to show that if you are an African-American man, you are more likely to be arrested, charged, convicted, and incarcerated for doing the same thing as white man. There’s just a lot of evidence of that.”

Clinton’s point is correct: At the end of 2014, the most recent data available, 2.7 percent of the black population in the U.S. was in prison, compared to 0.5 percent of the white population, according to the U.S. Justice Department. It’s just that, in the context of Avery—again, who is white—the answer makes little sense.

As the questioner notes, the issue in the case of Avery and Dassey has less to do with race—everyone in Making a Murderer is white, and Manitowoc County, where the pair were arrested and charged, is 94.6 percent white, according to U.S. Census data—and far more to do with income.

Avery was only able to afford his top-notch attorneys because the Wisconsin state government awarded him hundreds of thousands of dollars for his earlier wrongful conviction. Dassey had to rely on public defenders, one of whom allegedly colluded with the prosecution and—spoiler alert—ultimately helped send him to prison.

This is not an isolated issue. The burden borne by poor Americans who find themselves in the criminal justice system is, according to multiple studies, far heavier than that of Americans with greater means.

Of course, no one can fault Clinton for not having the time to watch 10 hour-long episodes about a decade-old murder case. But perhaps now would be a good time for one of her aides to fill her in on the basic details.