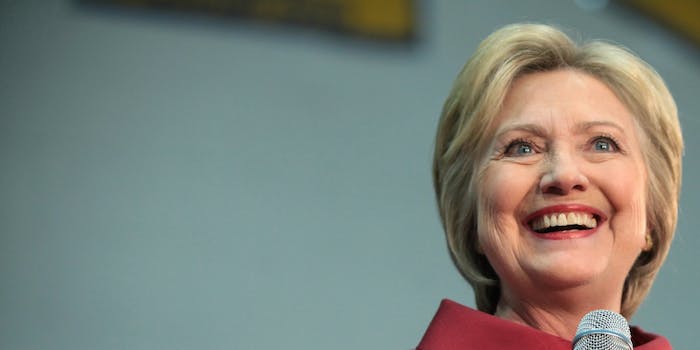 Hillary Clinton is polling twice as well against Democrats this time around.

Hillary Clinton is officially running for president—again. But this time, things are wildly different.

In April 2007, 19 months before the 2008 presidential election, Clinton led all Democrats in polls 36 percent to the 28 percent of Barack Obama, her closest competitor and the eventual winner.

Today, 19 months before the next election, Clinton leads all Democrats by more than 47 percentage points, according to Real Clear Politics’ poll averages. Massachusetts Sen. Elizabeth Warren, her closest competitor, clocks in at an average of 12.2 percent against Clinton’s 59.8 percent—and Warren may not even be running.

Clinton’s lead today is among the largest either Republicans or Democrats have seen in the last half century. The only exception is Al Gore’s 2000 run for the White House. In April 1999, Gore held a 66 percent lead over the 23 percent of former New Jersey Sen. Bill Bradley (D). Gore would go on to win the nomination and then lose an exceedingly close general election to George W. Bush due to a historic court decision to stop vote recounts in Florida.

Looking at these numbers, it’s clear that anything but a Clinton win for the Democratic nomination would be among the biggest shocks in American political history. That doesn’t mean she ought to take the race for granted—remember, she was “inevitable” eight years ago, too—but this time, she has no real rivals in her own party, save the potential for a surprise ringer coming up from behind.

Clinton’s real rivals this time around are all in the Republican party. She’s beating them all in polls right now, but the margins are much, much smaller—meaning that as the race heats up, it’ll be a real competition.

In country-wide general election polling, Clinton is ahead of all the Republicans by anywhere from three to ten points, according to recent polls from Fox News and Public Policy Polling. The latest Quinnipiac poll focused on presidential swing states show a healthy Clinton advantage over every Republican except Rand Paul.

Then there are the prediction markets, where anyone can make bets on political futures. PredictIt, the biggest market in America and one that boasts higher accuracy than polls over the last two election cycles, is clear on Clinton: 77 percent say she’ll win the Democratic nomination. On the general election, her chances are at 50 percent, a significant advantage over her closest rival, former Florida Gov. Jeb Bush, who sits at 30 percent.

There are other ways this year is different from 2008.

Back then, a profoundly unpopular Republican president had 28 percent approval rating, the economy was troubled, and recent Democratic 2006 electoral victories made it easy to understand why the Democrats had such an advantage going into the general election.

Today, Obama’s approval rating is 45 percent, twice as high as Bush’s was at the same point in his presidency. The economy is growing, though there’s little smoothness about it. Recent elections have been a pendulum: 2014 was a Republican grand slam, 2012 a Democratic win, 2010 another Republican triumph.

This means that the general election is a tough prediction, especially this far out from votes being cast.

As the Daily Dot’s Aaron Sankin reports, Clinton’s domination means the Democrats may have little choice but to go all-in on the divisive candidate. It makes her an easy target for Republicans and puts less pressure on her to focus on getting Democratic voters fired up—and that may make all the different come Election Day.