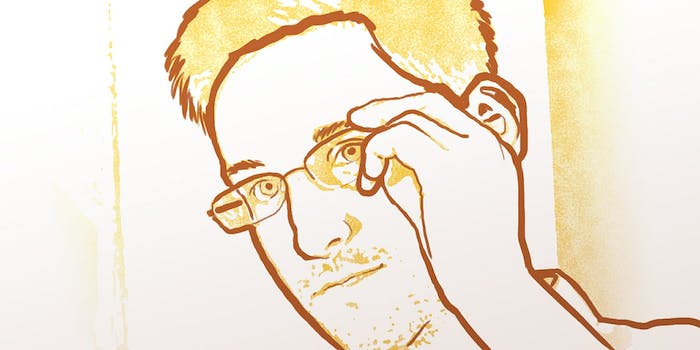 The truth is more complicated than Clinton made it seem.

Hillary Clinton, who left her job as secretary of state four months before the Snowden leaks began in June 2013, and former Maryland Gov. Martin O’Malley argued that Snowden pursued the wrong approach when he stole documents exposing far-reaching and now-controversial U.S. surveillance programs and gave them to journalists.

“He could have gotten all of the protections of being a whistleblower. He could have raised all the issues that he has raised.”

O’Malley said that Snowden “put a lot of Americans’ lives at risk,” adding, “Whistleblowers do not run to Russia and try to get protection from Putin. If he really believes that [he’s a whistleblower], he should be back here.”

It is true that Snowden had a legal option for blowing the whistle on government programs that he believed violated the law. The Intelligence Community Whistleblower Protection Act (ICWPA) offers employees and contractors of military intelligence agencies, including the National Security Agency, the opportunity to tell congressional intelligence committees about “matters of urgent concern.”

The ICWPA does not, however, offer whistleblowers any protections from retaliation by the agency employing them, and retaliation is a common tactic for silencing dissenting voices. Agency bosses can revoke a whistleblower’s security clearance, without which he or she cannot work in the intelligence field.

“Even if Snowden had gone through that process,” said Bradley Moss, a lawyer who specializes in national-security litigation, “it does not afford him any protection if he was subsequently retaliated against by [the] NSA in the form of a clearance revocation (to say nothing of possible criminal prosecution).”

President Barack Obama signed an executive order prohibiting intelligence agencies from retaliating against whistleblowers, including by revoking their security clearances. But unlike the ICWPA, Obama’s order only applied to government employees, not contractors like Snowden. It has since been extended to cover contractors, but it would not have protected Snowden at the time.

Congress added whistleblower protections to the 2014 bill that funded the intelligence community, but those protections also do not apply to contractors.

Also complicating the case that Snowden should have used legal channels is the federal government’s long history of zealously prosecuting whistleblowers who use those channels. Civil-liberties groups have harshly condemned these prosecutions as heavy-handed and based on a combination of faulty reasoning and fear of transparency.

Moss said that several of Snowden’s disclosures about U.S. surveillance practices would probably qualify as “matters of urgent concern” under the ICWPA. He cited the government’s use of Section 702 of the FISA Amendments Act, which restricts surveillance on people in the United States, and Section 215 of the USA Patriot Act, which covers warrants for Americans’ records in national-security investigations.

“I believe Snowden could have legitimately raised concerns regarding the Section 215 and Section 702 programs under this standard,” Moss said. “I also believe he could have legitimately notified the committees of [the Justice Department’s] past failure to properly notify criminal defendants that Section 215 program information was being relied upon in their prosecution, as well as concerns that [the] NSA was not properly applying its minimization procedures.”

The Foreign Intelligence Surveillance Court (FISC), which authorizes surveillance warrants under these programs, has repeatedly rebuked the NSA for not “minimizing,” or scrubbing, the personal information of Americans that is unintentionally swept up in such searches.

Moss acknowledged that high-profile Justice Department prosecutions of whistleblowers like Thomas Drake, William Binney, and Edward Loomis “serve as cautionary tales” for government agents who might consider blowing the whistle to Congress.

“I think DOJ handled that entire situation terribly and in a manner that was way too heavy-handed,” he said. “Does that justify doing what Snowden did? No, I’m sorry, two wrongs don’t make a right.”

The Daily Dot asked the Clinton and O’Malley campaigns what the candidates thought of Snowden’s chances of fair treatment if he had followed the legal process. The Clinton campaign pointed to comments that did not address the question. The O’Malley campaign did not respond to multiple emails.