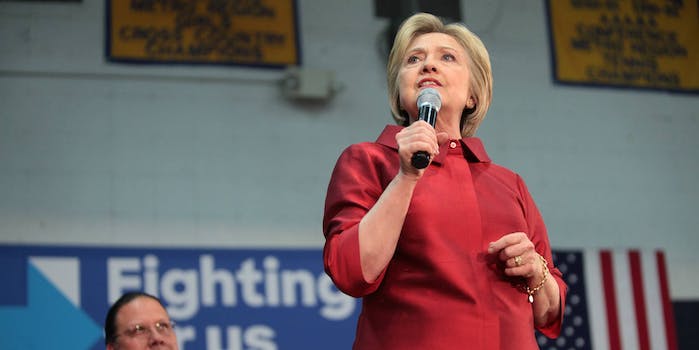 The path to the Democratic nomination is becoming more clear.

In addition to Connecticut, Clinton also won contests in Delaware, Pennsylvania, and Maryland. Sanders secured a victory in Rhode Island.

Connecticut has long been a battleground state between the two Democratic rivals. In recent polls, Clinton held a small and shrinking 2-point lead over Sanders.

Clinton’s win in Connecticut adds to Sanders’s steep odds at winning the nomination. Earlier on Tuesday, Sanders strategist Tad Devine told the New York Times that the campaign will continue after tonight’s contests but plans to “be up front” about the mathematical reality of winning.

“If we have a really good day, we are going to continue to talk about winning most of the pledged delegates because we will be on a path toward it,” Devine said. “If we don’t get enough today to make it clear that we can do it by the end, it’s going to be hard to talk about it. That’s not going to be a credible path. Instead, we will talk about what we intend to do between now and the end and how we can get there.”

At the time of publication, Clinton had secured a total of 2,097 delegates—1,578 pledged delegates and 519 superdelegates, who may change their votes at any time ahead of the Democratic convention in July, according to an Associated Press tally. Sanders sits at 1,232 delegates, 39 of which are superdelegates.

Tuesday’s contests puts Clinton within approximately 250 delegates of the 2,383 delegates required to outright win the party’s presidential nomination, with more than 1,240 delegates still up for grabs between now and the final contests in June.

The Democratic fight in Connecticut largely focused on major hot-button issues like guns and the economy.

Connecticut is the site of Sandy Hook Elementary, where, in December 2012, 20 children and six adults died in a mass shooting that raised the volume on gun-control debates around the country.

The debate continues in this state in particular, with families of the victims pursuing a contentious lawsuit against the manufacturer and seller of the weapons used in the massacre.

Clinton has continuously attacked Sanders on positions on guns, with the former secretary of state saying the Vermont senator is not liberal enough. Sanders ready reply is that the NRA gave him a D- rating.

The economy is where Sanders goes on the attack. Connecticut, which is close enough to Wall St. that it’s a short train commute away, has had a stagnant economy since 2008. Here, as in the rest of the country, Sanders pointed out Clinton’s connections to Wall St. and the yawning wealth gap in the state and nation at large.

The message seemed to have resonated. Last weekend, 10,000 supporters turned out to a Sanders rally in New Haven.

“All over this country now, people are taking a hard look at the status quo,” Sanders said. “They’re looking and saying, why is it that we have more wealth inequality than any other major country? Why is it we have a proliferation of millionaires and billionaires but thirty-plus percent of the kids in New Haven, Connecticut are living in poverty?”

The 2016 election continues May 3 with a vote in Indiana. The polls show that’s a tight race as well, with Clinton holding on to just a 4-point lead in the state.