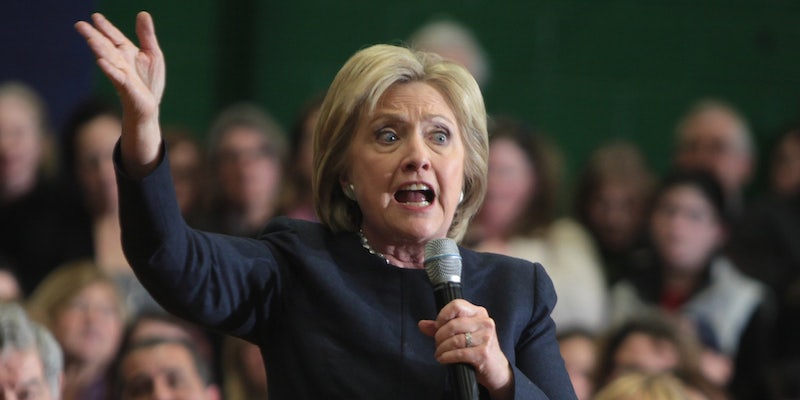 'None of these folders or files shown are from the Clinton Foundation.'

The hacker behind the 2016 Democratic National Committee breach now claims to have hacked the Clinton Foundation.

“Hillary Clinton and her staff don’t even bother about the information security,” the hacker calling himself “Guccifer 2.0” wrote in the post revealing the files. “It was just a matter of time to gain access to the Clinton Foundation server.”

Experts and journalists are skeptical, however, at what appears to be a publicity stunt rather than a legitimate leak.

The hacker, whom cybersecurity experts believe works for the Russian government, claims the Clinton Foundation literally had a folder of contacts called “Pay to Play,” a reference to Security and Exchange Commission (SEC) rules that prohibit people from paying government officials. Documents in this folder related to a piece of legislation by Rep. Jeff Denham (R-Calif.), whom the source of the documents believe personally benefitted for the bill.  There was no “murder” or “bribes” folder in sight.

Documents inspected by the Daily Dot show direct links to the Democratic Congressional Campaign Committee (DCCC), files from which Guccifer 2.0 leaked in August. One Microsoft Word document appears to contain notes by Ryan Jham, who was at the time the notes were written, in 2012, the rapid response director at the DCCC.

The data, which in many instances stretches credulity, has not been verified in any way. That hasn’t stopped a number of Donald Trump fans on websites like Reddit and Drudge Report from celebrating the leak as the factual anti-Clinton “October surprise” that WikiLeaks founder Julian Assange failed to deliver earlier today.

The alleged leaks claim to detail dealings between banks, corporations, and major politicians.

At first blush, this Guccifer 2.0 dump of purported Clinton Foundation docs appears to be repurposed docs stolen in the DCCC hack.

In a statement to Politico, the Clinton Foundation denied the documents and folders came from their organization.

“Once again, we still have no evidence Clinton Foundation systems were breached and have not been notified by law enforcement of an issue,” a spokesperson said. “None of these folders or files shown are from the Clinton Foundation.”

Update 4:58pm CT: Guccifer 2.0 responded to skepticism about the legitimacy of the breach by claiming to have many more files.  “Keep following me,” he said.