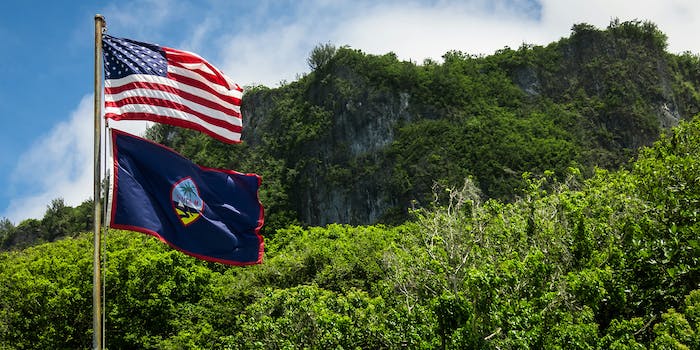 When's the last time you thought about Guam?

Tensions between President Donald Trump and North Korea continues to escalate, pushing the small island territory of Guam into the national spotlight.

After Trump threatened North Korea with “fire and fury” this week, the reclusive country fired back, saying that Guam–a strategic military location for the United States military–could be in its crosshairs.

The episode led to a sudden interest in the island territory and a spike in Google searches for basic questions like “Where is Guam located?” (It’s in the Western Pacific Ocean, only approximately 2,131 miles from North Korea.) Here are some other things you should know about Guam.

1) A key location for the U.S. military

Guam, a 210-square-mile island in the western Pacific Ocean, is a major strategic area for the United States military. It’s roughly 6,000 miles from California.

In total, the several military bases on the island cover more than a quarter of the island’s landmass. The military has a major naval base, Coast Guard base, air force base, and several telecommunications and harbor points that are used by the military for training missions and defense in the Pacific.

Guam has an ecological problem that boils down to the brown tree snake—an invasive species that has caused millions of dollars in damage to wildlife and commercial loses since being introduced to the small island. The snakes have decimated the population of native birds that live there.

In 2013, the United States came up with a somewhat zany idea to help eradicate the brown tree snake: parachuting 2,000 dead mice pumped with acetaminophen onto the island to entice the snakes to eat. The brown tree snake can be killed by just eating 80 milligrams of the drug, which is commonly referred to as Tylenol.

The project, which cost $8 million, also had a military purpose—and that’s not including the fact that the mice were basically miniature air commandos. NBC News reported at the time that the brown tree snakes caused roughly 80 power failures in electric substations that power one of the largest military bases on the island, so killing them with drug-filled mice would also save the military $4 million in annual repair costs.

Guam has a soccer team and attempted to play in the 2018 FIFA World Cup in Russia. The team, which won its first FIFA-registered victory in 2009, played in the second round of qualifying matches in a division consisting of Iran, Oman, Turkmenistan, and India.

Guam finished in fourth place with two wins, five losses, and one draw.

But hey, there’s always the next round of qualifying playoffs for the 2022 World Cup in Qatar.

4) The strange history of Guam becoming a U.S. territory

In 1898, as the United States was warning with Spain, the U.S. took Guam from the European country, and… the way it happened was pretty odd.

According to History.com, the Americans arrived at Guam and shot warning signals to let the Spanish settlers on Guam know that they were there but received no response. Soon, Spanish authorities came up to the American boat off shore—but they didn’t know that the two countries had actually gone to war.

The Americans sent a letter to the governor of Guam telling them they had 30 minutes to surrender and 29 minutes later the small island was officially American.

The Americans then left a few days later.

5) American in name only

People born on Guam are U.S. citizens by birth—but that citizenship doesn’t come with many of the perks that people in the 50 states take for granted.

For example, people on Guam can’t vote and have no representation in Congress. But they aren’t alone.

The same lack of basic citizenship rights also extends to other U.S. territories like Puerto Rico, the U.S. Virgin Islands, American Samoa, and others.

6) Guam is a big talking point for the United Nations

While Guam gets a raw deal in terms of American politics, they are debated yearly in the United Nations.

The island is among the 17 “Non-Self Governing Territories” represented in the global-government body. Other territories under this umbrella include America Samoa, Anguilla, Bermuda, the Cayman Islands, French Polynesia, and others.

Essentially, this means that each year the U.N. addresses the status of Guam and the other territories. So far, nothing has happened since the island was added to the list in 1946.

To circle back to the current tensions between the United States and North Korea, Guam represents the closest target for North Korean dictator Kim Jong-un to hit if he felt like starting a war with America.

With all of the strategic military bases stationed on the island, it could make for an enticing target.

While Japan has said it could shoot down any missiles North Korea sent toward Guam, and South Korea said the North would face a “stern and strong” response if it carried out any attacks on the island, it would represent a first demarcation of war.