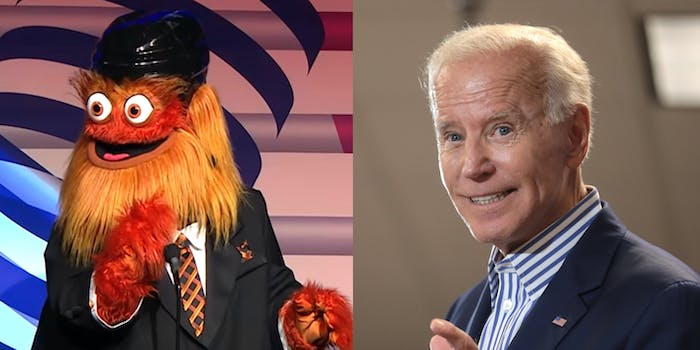 Does Joe Biden have the guts to put Gritty in his cabinet?

Biden's treasury pick will apparently be 'accepted by all elements' of the Democratic party.

President-elect Joe Biden on Thursday said he has chosen who he will tap to become the country’s next treasury secretary, adding that they will be “accepted by all elements of the Democratic Party, from progressive to moderate.”

An announcement about the pick is reportedly expected “soon.”

Biden’s boast that the pick will be “accepted by all elements” likely means it will be a politically safe choice, but a faction of the internet has a different idea in mind. Who is someone that would please every element within the party? Gritty.

It shouldn’t come as a shock that the Philadelphia Flyers mascot and meme magnet has become a top choice for a Biden administration.

In the wake of Biden taking Pennsylvania as mail-in ballots were counted during the election, Gritty was a major part of the online and IRL celebration.

Continuing that, many people joked that the mascot would be the pick that would be “accepted by all elements” of the Democratic party.

While Gritty may have the backing of a contingent of people online, it’s looking likely that Biden will choose someone like Janet Yellin, according to Bloomberg. Yellin served as the Fed chair during former President Barack Obama’s administration.