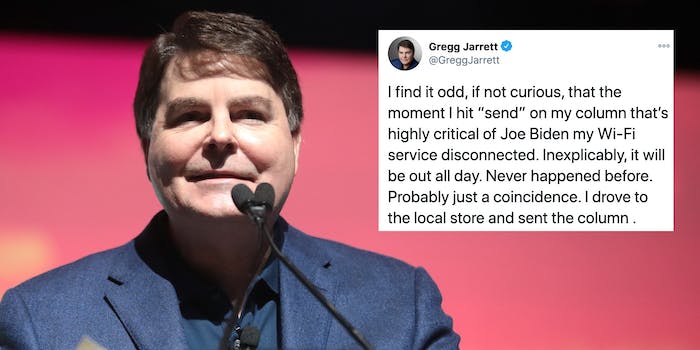 Gregg Jarrett finds it suspicious that his Wi-Fi failed while writing a column critical of Biden.

Fox News analyst Gregg Jarrett was roasted on Twitter this week after suggesting that issues with his home Wi-Fi could be linked to a conspiracy.

In a tweet on Friday, Jarrett claimed that his Wi-Fi connection had failed just moments after finishing an article critical of Democratic presidential nominee Joe Biden.

“I find it odd, if not curious, that the moment I hit ‘send’ on my column that’s highly critical of Joe Biden my Wi-Fi service disconnected,” Jarrett said. “Inexplicably, it will be out all day. Never happened before. Probably just a coincidence. I drove to the local store and sent the column.”

Some laughed at the fact that Jarrett seemingly believed that his column was so important that someone would attempt to keep it from being published.

“Fox analyst thinks someone cares enough about him to disconnect his WiFi,” @kylegriffin1 said.

Others joked that Jarrett had been stealing his neighbor’s Wi-Fi and had finally been forced to get his own.

“I’m glad your neighbor finally changed the WiFi password,” @tonyposnanski said. “Maybe you should buy your own service.”

“I find it odd, if not curious, that the moment before the third debate, a big event for critics of right wing media, my back went out,” @revrrlewis joked. “Inexplicably, it will be out all day. Never happened before. Probably just a coincidence. I drove to the local store for some IcyHot.”

Journalists also weighed in as well, arguing that Jarrett’s excuse was perfect for when an article is behind deadline.

“Sorry editors—Russia, or maybe China, or perhaps Iran, or even North Korea have hacked my internet and I cannot file my story on time,” @JennaMC_Laugh said.

Some jokingly imagined a world where Biden was in fact behind the dastardly plan to bring down Jarrett’s Wi-Fi.

Numerous users were also kind enough to offer Jarrett advice on how he could restore his home’s internet service.

It remains unclear whether Jarrett was ever able to fix his Wi-Fi.